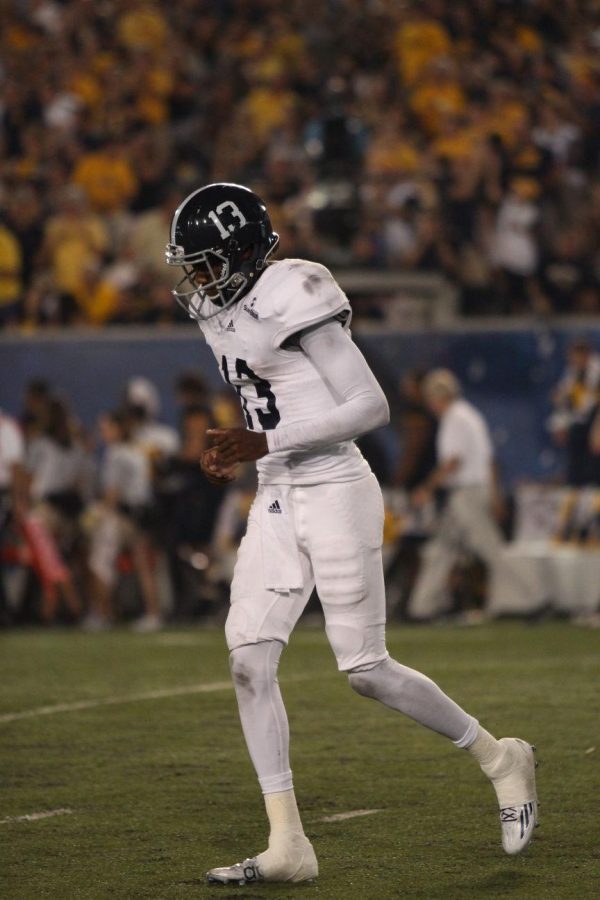 Losses in the season opener are tough on fans, coaches, and players alike. A team must be able to move on and not let one mishap result in the loss of a season. To turn things around, it is important to understand what went wrong and how to fix it.

We can start with the most obvious problem with the offense last Saturday, the struggle to establish the pass. To state the obvious, things did not go well. Redshirt junior quarterback Favian Upshaw, playing in his first full game since high school, finished the game with two completions on 13 passes and four interceptions. There was a mix of dropped passes and poorly placed balls that just can’t happen in big games. The interceptions were complete momentum killers that sucked the air out of the offense.

It is a rare feat for an opposing team to hold the Georgia Southern offense to less than 200 yards rushing and West Virginia allowed just 195. Looking at the statistics of the two main running backs may seem unimpressive at first glance. Junior Matt Breida rushed 17 times for 73 yards and redshirt sophomore L.A. Ramsby picked up 28 yards and 10 carries. While the numbers may not seem impressive, the runners were typically carrying defenders and fighting for every inch.

If it wasn’t the running backs ability there is one another place to look, and it is the offensive line. The issue wasn’t so much the skill of the offensive lineman, but more how West Virginia’s defense was able to implement their bread and butter defense to successfully stop the run. The Mountaineer defense is set up in a 3-3-5 where they use their defensive line to hold up the line, which clogs the gaps to force the running back outside where their linebackers make the tackle. They were able to execute this perfectly against the Eagles.

This trickles down to the running backs and really shows how much of their success is reliant on the big guys up front. Last season, we would see Breida get past the first level of defensive lineman, elevate to the linebackers and use his momentum to run through and arm tackle, then take the ball on a ride to the end zone. Saturday, fans could see Breida nearly break free several times, but because he was held up at the first level, he wasn’t able to run through the arm tackling linebackers. This could also be seen when Upshaw would carry the ball. When he was able to get around the outside and away from the line, he picked up two of the biggest plays of the night.

On the subject of Upshaw, many were down on the backup who was asked to fill the role against a great West Virginia team. It left several whispers of whether or not the addition of suspended quarterback Kevin Ellison would have made a difference. Ellison may have made quicker reads at times and made better decisions through the air but overall the results couldn’t have been too much better with the problems up front. Upshaw is a capable quarterback and it is up to the offensive line to open up the running lanes against a tough defensive front.

West Virginia certainly has a great defense and that had a lot to do with the shutout last weekend. There is plenty of room for improvement in the Eagle offense and a humbling non-conference loss may set a tone of revenge moving forward against the Sun Belt opponents. The home opener is this Saturday against Western Michigan at 6pm.