Eagles look to rebound at Hanner this weekend 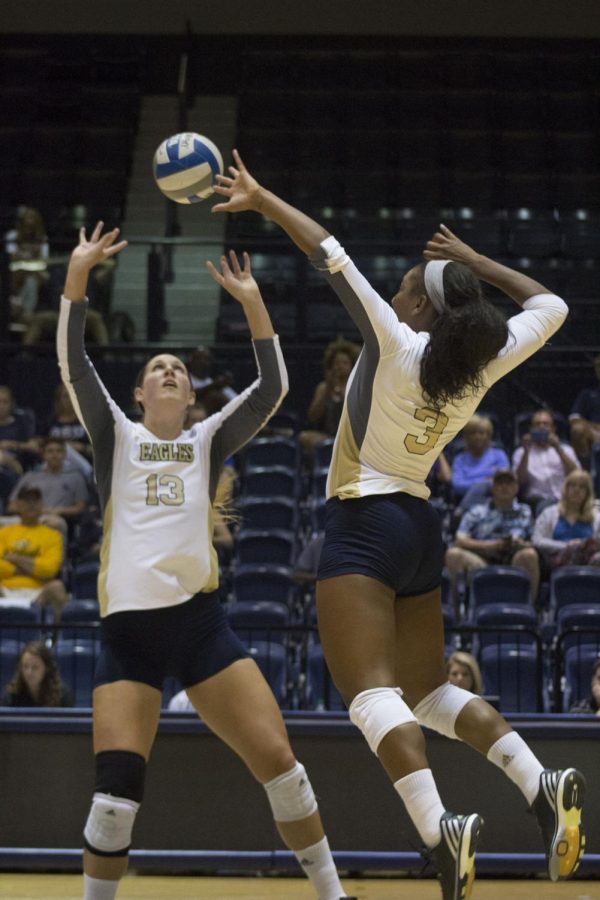 Nail-biter losses have been the biggest setback for Eagles Volleyball team this season. The 5-8 team can contribute five of their eight losses to sets being decided by only a few points. The Eagles will be taking on Florida Gulf Coast and South Alabama this weekend. Both opponents are playing respectable seasons so the Eagles will need to come ready for anything, especially close matches.

The unusual season flow started with the first defeat against Stetson on Aug. 28. When both teams took a set making the match 1-1, the intensity heightened. In the third set, Southern managed to find opportunity and win the set 25-23. But in the fourth, Stetson came back to win an equally close set, 23-25. The deciding fifth set went to Stetson, giving the Eagles their first loss on the season.

The deciding-point defeats continued against Tennessee State and Winthrop on Sept. 11. The Tigers match would get to 1-1, with both teams finding a set win. But the third and fourth sets found Southern losing by scores of 23-25. Winthrop on that same day made for a nearly identical story: 1-1 to start the team point scoring. The Eagles then would lose a close second set 23-25. They would close by losing the fourth set 24-26.

Little Rock and ULM’s recent matches play on the same deciding factors. Whether the Eagles do or don’t get set points, the team proves they can go high-tempo, but fade down the stretch. It’s a theme the team has had, which shows in some of their wins. With 15 matches still left on the season, there is plenty of time for Southern to figure it out.

Stat-wise, Southern has 590 kills on the season. Redshirt sophomore Megan Chevalier leads the team in kills now with 131. Freshman Stephanie Spencer is behind her with 130 kills. Redshirt junior Katie Bange follows them with her 79 kills.

Defensively speaking, the Eagles carry 737 digs this year so far. Redshirt junior Alex Beecher has 266 digs on the season, making her the team lead by a lot. Bange is next with 103 digs. Junior Avery Stephens is third with her 90 kills.

The team is doing good, but they are not where they want to be. Starting conference play 0-2 is not the path they had in mind, especially when those matches have been at home. The schedule alternates two away matches and two home matches after South Alabama. Capitalizing in Statesboro will be important. There is no telling how competition play will be in Texas and Louisiana for the Eagles later in the year.

Florida Gulf Coast is 7-6 this year. They started strong, winning four of there first five matches. Recently, however, they are in a slump losing four of their last five matches., losing their last three matches by scores of 1-3. South Alabama is 5-6. For the most part, they have alternated winning and losing. Their recent matches against Appalachian State and Arkansas States resulted in defeats. Samford was their last win at the Jaguar Invitational on Sept. 12.

There is opportunity for the Eagles to play big this weekend, and they know what needs to be done. Florida Gulf Coast will be on Friday, Sept. 25 at 5 p.m. in Hanner. South Alabama will be on Saturday, Sept. 26 at 6:30 p.m., also at Hanner.