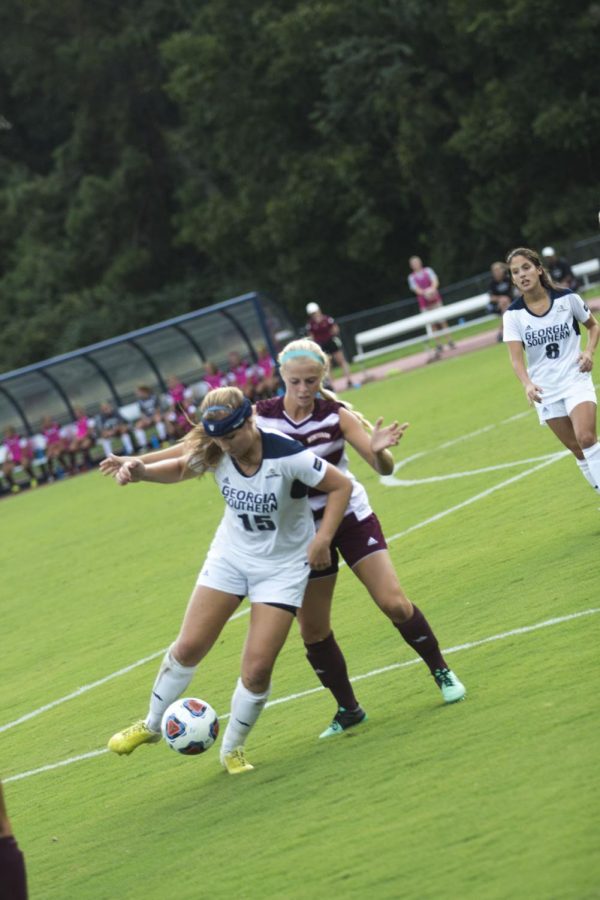 The Eagles started the game with a steady pace and strategic passing throughout the first half. It was gritty back and forth, with both teams fighting for possession.

At the end of the first half, it was a 0-0 game. Georgia Southern’s defense was great, allowing no shots on goal from Winthrop.

Going into halftime, Head Coach Brian Dunleavey said that the Eagles were doing enough to stay in the game.

“I think it was an average performance from both teams in the first half,” he said.

The second half started just like the first, with great defense from both teams. Then Georgia Southern took control.

In the 60th minute, Junior Jennifer Wittick scored her fourth goal of the season with the assist from both Junior Melinda Lukas and Senior Nora El-Shami, giving the Eagles a 1-0 lead

Senior Cori Dulmage followed suit in the 81st minute of play with a 2-0 leading goal from an assist by El-Shami.

“I think we showed more of our strengths in the second half,” Dunleavey said.

Towards the end of the game, the defense held on and secured the 2-0 victory for the Eagles, allowing only one shot on goal from Winthrop.

At the end of the game, Nora El-Shami reached a milestone. She is now third in career shot attempts in GSU Women’s Soccer history.

The Eagles then dominated Alabama State on Friday evening, marching to a 10-2 victory in the lopsided match.

A total of 19 shots were taken from Georgia Southern in the first half of play. In the 15th minute, Jennifer Wittick scored with an assist from Nora El-Shami, giving a 1-0. Three minutes later, the duo of Wittick and El-Shami stuck again, extending the lead by two.

The next minute of play was all offense from El-Shami. She scored back to back goals, one with an assist from Wittick, and the other being a straight shot from 25 yards out.

The first half concluded with a goal from Freshman Hallie Huff, with an assist by Junior Taylor Burns and Senior Jessica Scales, giving the Eagles a 5-0 lead going into halftime.

In the 49th minute, Wittick scored her third goal of the game from a penalty kick, giving Wittick the Hat Trick and her seventh goal of the season.

The 60th minute of play created history for Georgia Southern.

Jessica Scales almost became the third to record a hat trick, scoring goals in the 70th and 85th minutes of play.

The game ended in with a 10-2 victory from Georgia Southern. They are currently 3-3-1 and are riding high with a three game winning streak.