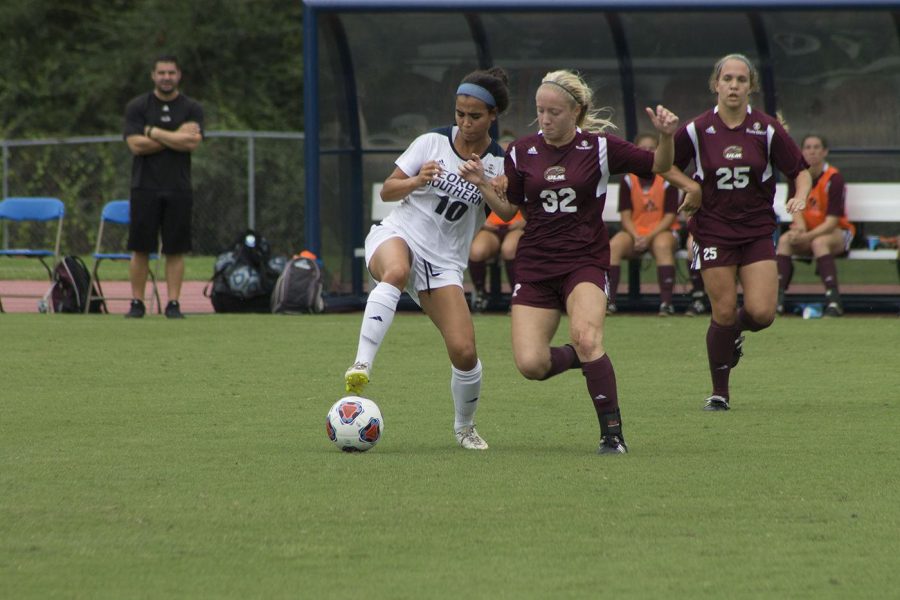 The Eagles kicked off Sun Belt competition for the 2015 season this past Friday against Louisiana Lafayette.

The game began at a fair pace between both teams. The Eagles opened up with aggressive offense and continued to play at that same pace throughout the first half. Lafayette matched that intensity, creating a competitive atmosphere for both teams. In the 11th minute of play, the Ragin’ Cajuns took a 1-0 lead when Cassandra Reyes scored from outside with the assist from Ashleigh Cade.

The second half, offensively-speaking, was all Eagles. They spent a majority of their time on the offensive end and had great ball movement. They had many opportunities to score, taking a total of 15 shots in the game with nine of those shots being shots on goal. However, they were not able to hit the back of the net,

The final score of the game was 1-0 Louisiana Lafayette. This was the first home loss in Georgia Southern women’s soccer history in the FBS. Their last home loss was on October 30, 2013, while competing in the FCS, to Davidson in a 2-0 loss.

Head Coach Brian Dunleavey was not upset with the way that the Eagles played in this match-up. He said that the team played great soccer in this game, and continuing to play and execute at this level will eventually lead to better results.

The Georgia Southern Eagles came out Sunday with an aggressive mindset. Coming off a three game losing streak, the Eagles looked as if they were playing with a chip on their shoulders. They seemed to be in complete control of the game as they shut out the University of Louisiana-Monroe 3-0.

The Eagles came out strong in the first half giving up only two shots on goal, both of which were saved by Keeper Emily Egan. Early on in the half, the Eagles had plenty of opportunities to score, but could not seem to get it going. They didn’t let those missed opportunities hinder the way the game played out. They were eventually able to score a goal late in the 45th minute of play. Georgia Southern got on the board with a goal by Cori Dulmage, assisted by Hallie Huff, which gave the Eagles a 1-0 lead going into the second half.

At the beginning of the second half, the Eagles came out looking to keep their momentum rolling. In the 49th minute of play, El-Shami scored off a penalty kick, which gave the Eagles a 2-0 lead. El-Shami kept playing strong by assisting Paige Hoover with a goal in the 65th minute, which extended the Eagles lead to 3-0. The assist by El-Shami gives her 10 assists on the season, which is a career high for her.

Offense was not the only thing going for the Eagles in the second half. On the defensive front, they gave up only one shot on goal. This was the second time all season that the Eagles were able to shut out the opposition, and they did it in a dominating fashion. The defense kept playing aggressive all game which seemed to have gotten in the head of the Warhawk players. As the game came to an end, the Warhawks looked drained and the Eagles kept dominating the time of possession as they looked to drain the clock.

The Eagles are now 4-6-1 overall and 1-1 in conference play. They look to carry their momentum forward next weekend as they travel to Little Rock on Friday and Arkansas State on Sunday.