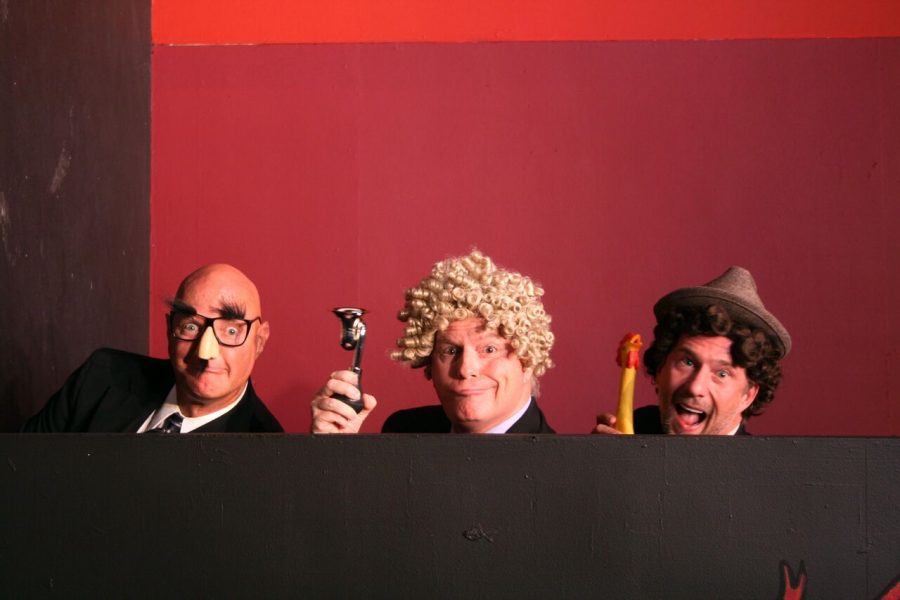 By Kat Shuman and Bailey Adcock

Why did the chicken cross the road?

If you’re interested in FINALLY knowing the answer, purchase your ticket to see the Reduced Shakespeare Company’s Complete History of Comedy (Abridged).

From Shakespeare to Chaplin to Jon Stewart, comedy has been around for centuries. On Saturday Sept. 26, Georgia Southern’s Performing Arts Center is giving students the opportunity to enjoy a lively show explaining the history of comedy itself.

Why should college students come see the show on a Saturday night? Austin Tichenor, co-director, co-actor and co-writer of the show answers, “College kids still like to laugh, right? Our show is the most fun you can have on a Saturday night with your clothes on.”

Tichenor, Reed Martin, the show’s co-director, co-author and Co-star and Dominic Conti team up for this hilarious and fairly intellectual performance. The three man troupe will present a fast-paced show packed full of jokes and skits that you won’t want to miss.

The History of Comedy had been performed off-Broadway, the White House, the Kennedy Center, the Lincoln Center, American Repertory Theater and Montreal’s famed Just For Laughs Festival. They have also performed in Israel, Australia, New Zealand, Hong Kong, Japan, Singapore and Bermuda and have visited countless civic and university venues throughout the Unites States, the U.K., and Europe, Tichenor said.

As a Georgia Southern student, your ticket to this nationally viewed show is $10. Student student and faculty tickets are available for purchase over the phone, and you can also purchase tickets in-person at the Performing Arts Center.

The PAC’S TOP TEN REASONS TO SEE THE COMPLETE HISTORY OF COMEDY (abridged):

10. You can’t major in Netflix. Besides, you already watched every season of “Orange is the New Black AND Friends.” Twice.

9. You can skip the gym; laughing burns calories.

7. Hulu has too many of the same commercials.

6. Looking for a joke to impress that cutie in class? Don’t be awkward; steal a joke from the show!

5. You haven’t worn anything but yoga pants in 19 days, and you’re starting to think that’s normal. (It’s not normal).

4. Studying for that French test is terrible, and you don’t want to.

3. You signed up for the PAC Newsletter and won free tickets! (if you didn’t, don’t you wish that you had?)

2. This is cheaper than the movies – where last time you stepped in something sticky AND got the burnt popcorn.

1. The beer pong tourney doesn’t even start until 11 p.m. Dude, you have time.