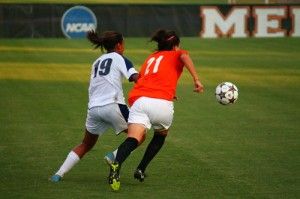 The Georgia Southern Eagles dominated on all fronts this past Friday in their 5-1 victory over Francis Marion University.

The first half began with aggressive play on offense from the Eagles. In the 10th minute, Angelica Wallerstedt scored off the corner with an assist from Nora El-Shami, giving the Eagles a 1-0 lead.

Throughout the half, defense was a major factor for the Eagles, allowing no shots on the goal from Francis Marion. Coach Brian Dunleavey said at the end of the game that defense played a big part in the game and led the Eagles to victory.

“A lot of what we did this week [in practice] was defensive stuff, particularly since we came off a weekend where we gave up six goals,” he said.

Later in the first half, Paige Hoover scored in the 36th minute off an assist from El-Shami. Less than three minutes later, Jessica Scales scored with an assist from Cori Dulmage. At halftime, the score was 3-0.

The second half of play was all Ga Southern all the way. In the 51th minute of play, El-Shami scored off a penalty kick that gave the Eagles a dominating 4-0 lead. Jennifer Wittick followed with a goal of her own in the 67th minute, extending that lead to 5-0.

Defensively, Georgia Southern maintained great position in the second half, allowing only one goal, in the 85th minute, off four shots on goal.

The Eagles cruised to victory with a 5-1 win. Coach Dunleavey was proud of his team getting their first win of the season.

“It’s nice to have that winning feeling,” he said. “This team has been playing really good soccer, so for them to get rewarded with the win, it should make them feel a lot better about themselves, and hopefully it should carry on to Wednesday night.”

The Eagles next game is this Wednesday September 9 against Winthrop University at 6 p.m. at Eagle Field.