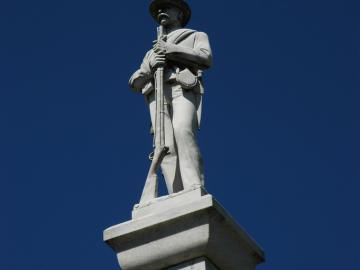 After the tragic shooting that occurred in Charleston, SC on June 17, a debate resurfaced throughout the entire United States. Confederate symbols were put into question since most of them symbolize issues of race that date back to the Civil War.

In Statesboro, a confederate memorial statue stands in front of the Bulloch County Courthouse Square. James Major Woodall, 21, is a Georgia Southern political science major, who initiated a petition to have the statue removed or at least off government property after some debate on social media.

“The reason why we petition, it didn’t necessary come from myself. It was a conversation that was on social media and somebody mentioned me in that conversation asking if a petition had been started. To which I responded that “no,” I was asked if I was willing to start one start one and I did, accordingly,” Woodall said.

The statue was placed in 1906 by the local chapter of the United Daughters of the Confederacy in order to honor the lives lost in the Civil War.

“The issue of the statue was not the statue in itself, it is what represents. It represents a culture that neglects, ignores, and demeans people of color, minority decent and cultures in our country and community,” Woodall said.

The petition was met with significant opposition from members of the Sons of Confederate Veterans Ogeechee Rifles Camp 941 and of the Georgia chapter of the United Daughters of the Confederacy. Woodall was shocked by the claims the opposition made, especially against Georgia Southern students.

“The point that really shocked me was the fact that a lot of the community spoke in favor of the statue. A lot of times, they used the redirect that the fact of students, who don’t belong here, have no voice on what goes on in Bulloch County,” Woodall said. “They limit our productivity and ability to speak of these issues because we are “students at Georgia Southern.” That is the fact that shocked me the most. As great as Georgia Southern University is, we are not allowed to discuss these issues because we are “not from here,” so we are not community.”

Woodall was supported and represented by Georgia NAACP President and Statesboro attorney Francys Johnson. During the first meeting to discuss the petition, there were tense moments between supporters of the confederate symbols and the opposition. Johnson requested that the supporters remove their confederate flags classifying the flags as the “Southern swastika”.

During the second meeting on July 21, Woodall petitioned a committee to be formed, as he had done before, but no action was taken to comply with Woodall’s requests.

“We want to put that community together so we can have both sides come to the table and discuss possible solutions on how we can move forward as a community together. Unfortunately, that did not happen. The Bulloch County Commissioners decided to just act and say, “We will just leave the issue alone because it’s too divisive, challenging, and polarizing to a certain degree,” so instead of having those difficult conversations, they refused to move forwards towards a more unified community,” Woodall said.

After much discussion between supporters and the opposition, Commissioner Roy Thompson made the notion for the statue to remain on the courthouse lawn. The decision was reached on Tuesday Aug. 4, after an unanimously vote by Bulloch County commissioners.