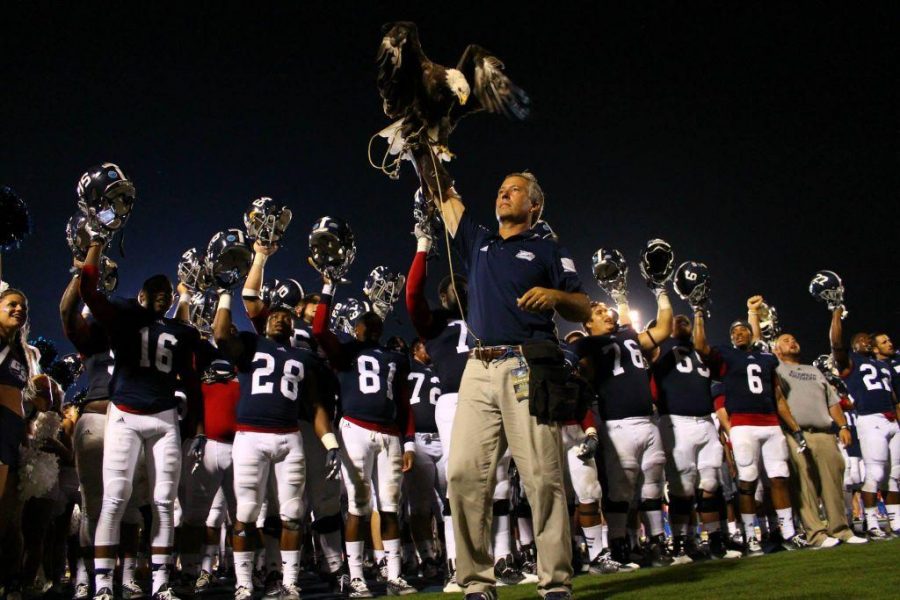 The Georgia Southern Eagles capped off their incredible 2014 season with a ferocious defensive goal line stand to seal a 22-16 victory over Louisiana Monroe to win the Sun Belt title outright in their first season in the conference. After a 1-2 start to the season that included last minute losses to ACC foes North Carolina State and Georgia Tech, the Eagles rebounded and rattled off seven straight conference wins en route to a perfect 8-0 record in the Sun Belt.

Some highlights of the year included an 83-9 thrashing of Savannah State in the first home game of the season. The Eagles amassed 684 yards of total offense, and the defense did not allow SSU a touchdown until the last minute of the game.

The Eagles hosted longtime SoCon rival Appalachian State on September 25 in a nationally televised game on ESPNU. The 24,535 fans in attendance were the second largest in Paulson Stadium history, and they were not disappointed with the performance on the field. The Eagles dismantled the Mountaineers 34-14, not allowing them to score in the first quarter or in the entire second half. Kevin Ellison and Matt Breida combined to rush for 286 yards and two touchdowns to pace the Eagles to a satisfying victory.

Exactly one month later on October 25, the Eagles traveled to the Georgia Dome to take on “the other GSU”, or the school some people call Georgia State. The Eagles rocked the Panthers in a 69-31 shellacking that saw the Eagles set a new Sun Belt conference rushing record with 613 yards and 10 rushing touchdowns. It also marked the 300th win in Eagles football history.

The Eagles then closed out the season with the win over ULM at Paulson Stadium, giving the Eagles the Sun Belt title. After injuries forced Ellison and backup quarterback Favian Upshaw out of the game, third string senior Ezayi Youyoute stepped in and ignited the offense with 81 rushing yards in the fourth quarter, giving the Eagles a 22-16 lead in the final minutes. After ULM drove down to the goal line, the Eagle defense dug in and kept the Warhawks out of the end zone.

Several Eagles were recognized for their performance after the season. Head Coach Willie Fritz was named Sun Belt Coach of the Year for leading the Eagles to the conference title. Matt Breida, LB Edwin Jackson and OL Garrett Frye and Manrey Saint-Armour were named to the First Team All-Sun Belt. Kevin Ellison and FS Matt Dobson were selected for the Second Team All-Sun Belt, while L.A. Ramsby was selected to the All-Sun Belt Newcomer Team.

2014 saw a new era begin at Georgia Southern. With the move to the FBS, expectations were just as high as they had been in previous years. Fans, coaches, and players alike all wanted to win and establish themselves in the new conference. Needless to say, they’ve done just that. As the Eagles stormed through the Sun Belt, they began to garner more attention, with people all over the nation asking who was this team from Statesboro that was destroying their opponents with a relentless rushing attack and a scrappy defense. The Eagles won’t be taking anyone by surprise this season.

So while it’s fun to look back at last year’s team and boast of their success, the 2014 season is over. This year’s team will face new challenges, a conference familiar with their schemes, and arguably a tougher schedule, with trips to West Virginia and Georgia looming. But the Eagles will be ready, with a solid coaching staff and strong senior leaders ready to step up and accept new roles. I know I speak for most when I say that I’m ready for year number two in the Sun Belt and another year of cheering on the Eagles.