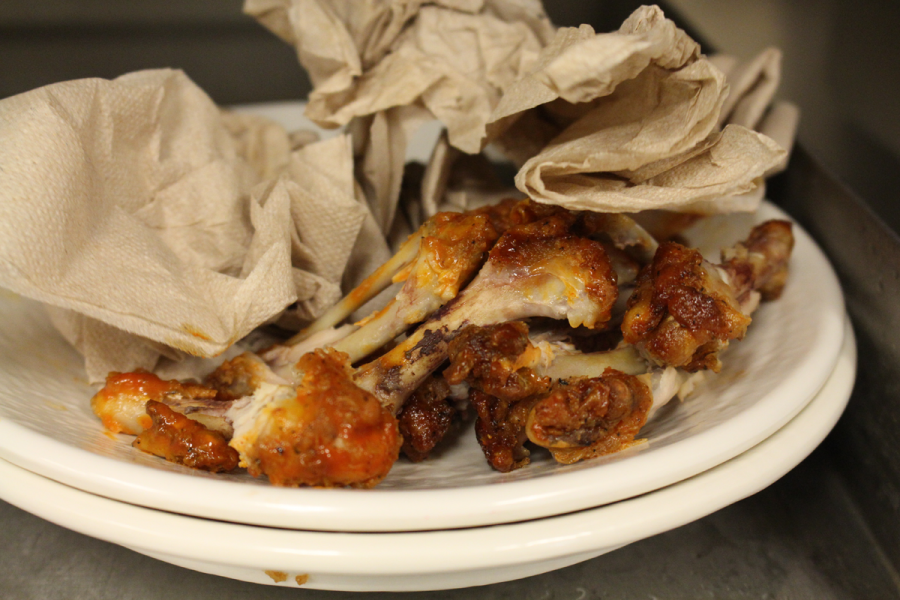 Last Wednesday, shortly after 1 p.m., over 80 students returned their dishes to the carousel within a 10 minute period. A majority of those dishes still had food on them – on many plates, it was a substantial amount.

Where waste comes from

Pre-consumer waste comes from the kitchen – when more food is cooked than students consume. It also includes cooking waste, Crawford said – like the bits of the onion that don’t go into the food.

However, Bud Fleming, general manager of the Dining Commons, estimates that only 20 percent of the dining hall’s waste falls into the pre-consumer category. The majority, 80 percent, comes from post-consumer waste.

During a walkthrough of the Dining Commons facility, Crawford pointed out a recently returned plate that still contained three waffles and assorted fruit.

“The biggest issue we have is with the post-consumer waste – what we have left on plates, and it’s a lot sometimes,” Fleming said.

Staff at residential dining have begun taking measures to prevent waste, and so far, it’s working, Crawford said. To cut back on post-consumer waste, chefs and servers do everything from reuse rotisserie chicken for next day chicken salad to weighing food scraps before they are tossed out.

LeanPath, a food waste tracking system, is helping Dining Commons staff to prevent overcooking and excess waste. The LeanPath device includes a touch screen, complete with a scale and camera.

Before anything goes into the trash, it is weighed, photographed and separated into one of seven categories of waste, Crawford said.

“Say at the end of the night, we have a pan of lasagna and we can’t do anything with that,” Crawford said. “It goes into LeanPath and it tells us what that value it would be. It takes a picture of it and then that food would have to be discarded.”

LeanPath lets cooks know when to cook less and what areas of waste need to be tackled. The Dining Commons has also made attempts to cut down on post-consumer waste by serving students smaller portions and making more stations staff-served, Crawford said. All the dining hall’s cardboard is recycled, and its used oil is given to a company that converts it into biofuel to help support sustainability.

Waste levels are not down where he would like them to be, but they are better than before, Crawford said. The Dining Commons has a single dumpster that is picked up twice daily.

“To give you a comparison, the old Landrum had two dumpsters that would be picked up twice a day,” Crawford said.

This is despite the fact that the Dining Commons did three to four times more business than Landrum did, Fleming said. He also said they try to get the word out to students about food waste.

“[We are] trying to educate our students constantly, to talk to them and educate them through various social media and stuff like that,” Fleming said. “To let them know how much waste we actually do incur.”

Crawford said it is important to remember that food waste means more waste than what’s left on the plate.

“What people don’t realize is food waste is not just the food that’s left over,” Crawford said. “Think about all the gas that was wasted to get that food here . . . the time, the energy, the money that it takes and then all of a sudden we’re throwing stuff away. It’s more than just the food, it’s the whole process of it.”