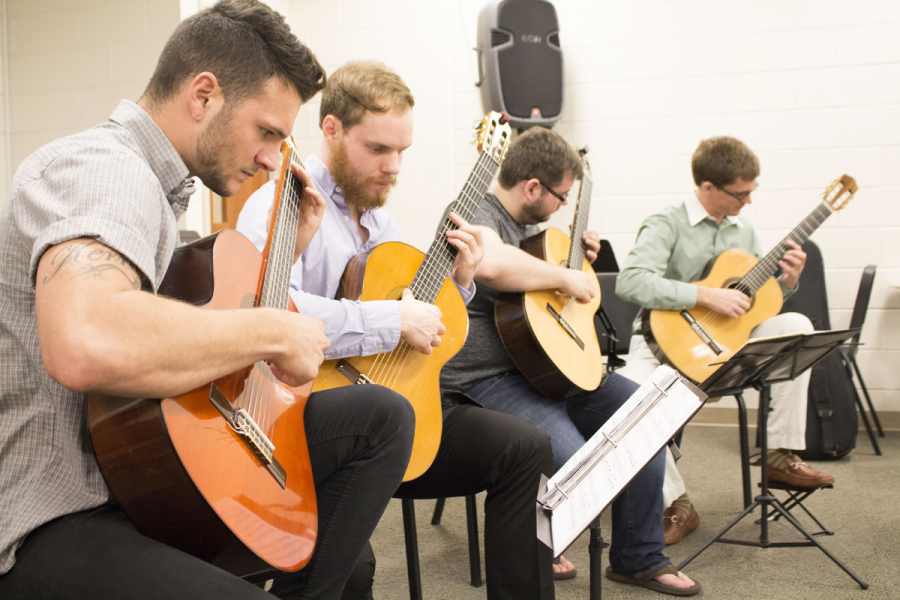 Featuring performances of classical guitar compositions as well as many arrangements of pieces originally written for piano and other instruments, this concert is packed with music from across the world.

Performers tonight will be featured in various groups as well as a few soloists, and they will include Joshua Cook, Austin Kent, Michael Foster, Robert Cottle, Jacob Sanders and Dr. Brian Luckett, the head of the guitar program at Georgia Southern University. Also featured as a special guest will be exchange student Arturo Rosas Carbajal, from Xalapa, Mexico.

“We try to be as diverse as we can in our repertoire to really show off the wide ranges of styles, textures and sounds associated with the guitar,” Luckett said. “The majority of the music at this concert is pieces for other instruments arranged for the guitar, but we’ve also included some contemporary pieces written for guitar, as well as dances and traditional folk music from Russia and Mexico.”

“Lots of people come to these concerts with the association of the guitar with rock, jazz, country music, etc.,” Luckett continued, “and so I think it’s always surprising for them to hear something different, like classical or romantic period music. It builds an audience, almost like a cult following, because the guitar is one instrument that really draws people in.”

The Georgia Southern University music department has only in the past year opened up its guitar ensemble program, under the direction of Dr. Luckett, a classical guitar professor from Savannah.

“I believe that the more these guitarists can do, whether it’s solos or duets or ensembles or whatever, the more well-rounded their musical careers can be. The ensemble shows strong and weak points for each player that you can’t find in solo performances,” Luckett said. “As a result, a lot of the players have really improved over the last year. I think the other faculty has been seeing things they’ve never seen before.”

The guitar students have been enthusiastic about Dr. Luckett’s impact on the guitar program since he arrived at GSU in spring 2014.

“He’s turned the program around,” Austin Kent, three-year guitar student, said. “He asks more of us than we were used to before, and pushes us harder. He’s given me a new interest in playing, and I would say I’ve improved as a guitarist more under his teaching than ever.”