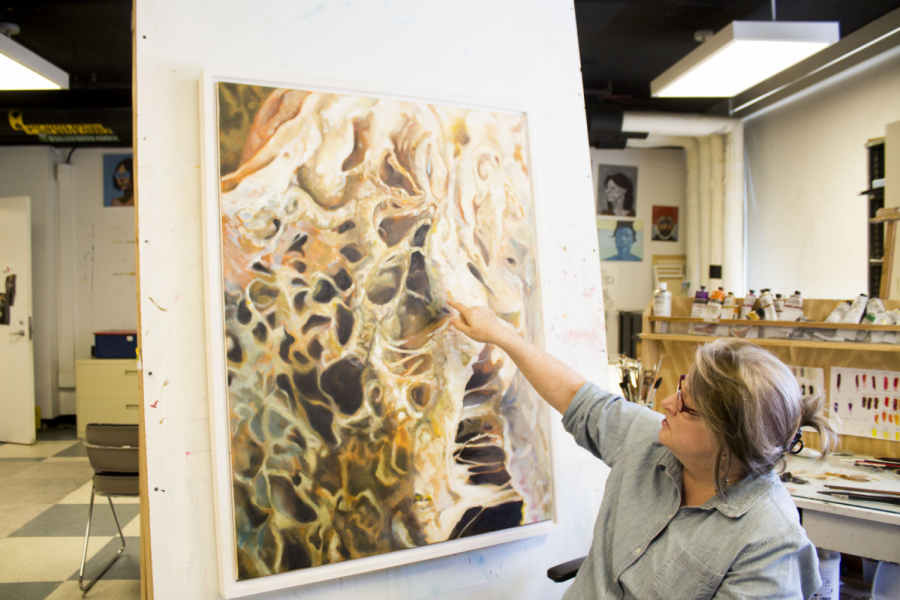 Upon first glance, Georgia Southern University graduate student Claudia Furlow’s art is an ode to color and texture. Ambiguous in form, her work looks as if it is some beautiful strange mix between a colorful coral reef and bone. What is bizarre, though, is that these gorgeous works of abstract art are actually stills of rotting meat.

“Ordinarily, a maggot-ridden piece of meat is not considered to be lovely, but I want people to see the wonder of the organic world. One of the things that I want to put across in my work is that I think animals and humans are amazing. The patterns that our tissue make is pretty astounding,” Furlow said.

“My painting itself if I needed to sum it up would be that I wanted to use a grotesque subject matter to use renaissance technique to make it beautiful,” Furlow said.

Using her back porch as a lab of sorts, Furlow established a maggot farm, using a piece of raw meat to attract the creatures and documenting their progress. When the maggots finally left the steak, the remnants of the meat had left a lacy texture. Furlow finished her experiment by using a camera to zoom in on the subject and take photos.

“My work looks abstract because I have removed the context, the context being the background and have zoomed into the texture. I blow things up several hundred times,” Furlow said.

The finished product of her experiment is now immortalized on canvas in her magnum opus, a piece titled “Battenburg Nursery.”

Although Furlow is now an accomplished painter, she was not always such a refined artist. A Virginia native, she says that she experimented with many other mediums before she decided that painting was the right route for her.

“I’m interested in tradition and the tradition of the oil painter was very strong. I started oil painting about fifteen years ago. I had been working at a museum for six years and I had intended to go to grad school right after I graduated undergrad, but I took the employment instead so during that time I didn’t have much time to develop my painting so now I’m enjoying focusing on it,” Furlow said.