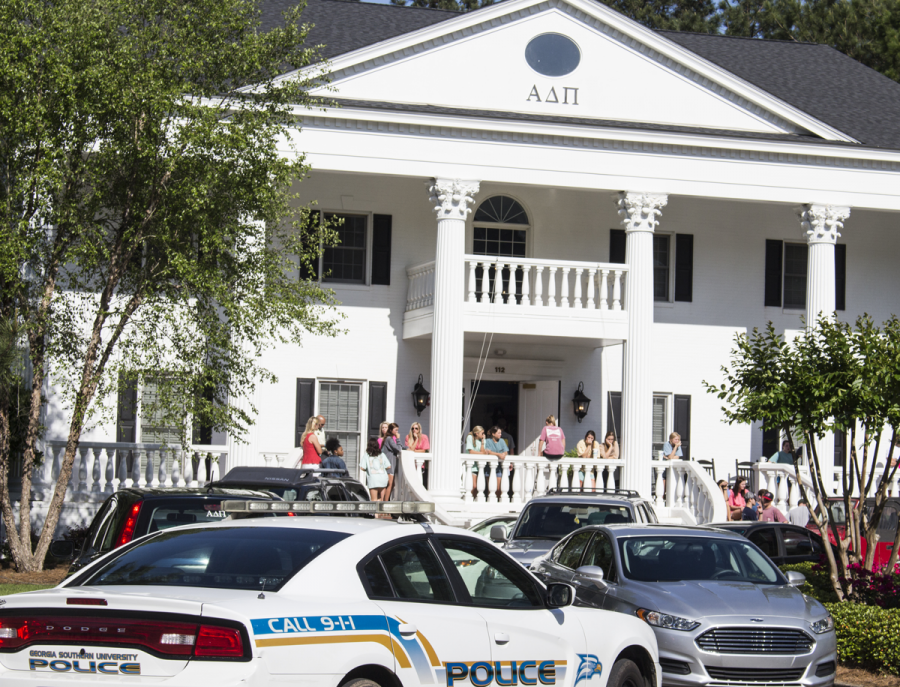 by The George-Anne staff

News slowly spread the morning of April 22 of a large pile-up on I-16 heading towards Savannah. It seemed like another bad accident, but then students started hearing that their fellow students were casualties in the wreck.

2:30 p.m. Tweets and Facebook posts hinted that students were involved, but no names had been released. Shortly after, President Brooks Keel sent out a letter informing students that five of their classmates had died and two remained hospitalized.

The rest of Georgia Southern students only had numbers and news stories at this point, but no names. However, on Olympic Boulevard, it was clear that the inhabitants of these houses already know who they had lost.

Olympic Boulevard was awash with waves of quiet students.

A girl slowed by traffic on her way out leaned against the steering wheel of her car, arm across her eyes as her shoulders began to shake.

On the porch of one house, a girl in a blue shirt began to sob, her cries echoing down the street.

Further down the row, a group of men poured out of the Kappa Delta house, dozen after dozen, more than 50 in all; brothers came to give their condolences.

Some of them stood, some of them sat, some of them frantically called parents on their phones, some were in groups and others were alone but no eye was dry as the sounds of unparalleled grief and loss reverberated through the Nursing Building.

Grief could first be seen on the faces of GSU’s administration as they worked tirelessly to come to terms with delivering a message which no one is prepared to hear. Then, professors consoled students, sorority sisters of the fallen women clung together and friends helped each other through incredible loss. The university was consumed with unmatchable grief, for unmatchable young women.

4:30 p.m. President Keel sent out another update, delivering the final piece of news that no one was ready to read: the names of the deceased.

Emily, Morgan, Abbie, Catherine and Caitlyn were all junior nursing majors on their way to the last clinical of the semester. While the rest of campus was asleep, these five young women were giving up their day to take care of others.

They were sisters, daughters, friends and classmates. The five of them wanted to dedicate their lives to others but unfortunately, their lives were taken in the process.

“They all had the best personalities and they could lighten my mood in a heart beat. They were really awesome girls,” Emmie Sanders, junior in the nursing program, said about all five of her late friends.

A fatal accident occurred yesterday at 5:45 a.m. on I-16 eastbound near Savannah claiming the lives of five Georgia Southern University students.

The list of names has officially been released by the Dean of Students. The five women killed in the crash were all juniors:

Brittney McDaniel and Megan Richards are being treated for injuries.

All five students were nursing majors heading to participate in their final clinical of the semester at a hospital in Savannah.

According to Bryan County News, it was a seven car pile up. The accident occurred near mile marker 140 and two of the injured were flown straight to Memorial University Medical Center.

According to Freddy Howell, Bryan County Emergency Services, around 1:45 a.m. a crash between a tractor trailer and RV occurred. Later that morning around 5:45 a.m. one to two semi trucks failed to slow down for traffic and rear-ended the cars in front of them.

Officials say that three tractor-trailers, one being a tanker truck, and four other vehicles were involved in the accident. Four of the victims were pronounced dead at the scene and another died at the hospital. Two others were taken to the Memorial Hospital in Savannah and are in unknown condition.

“You could see the car that got the worst of it, I assume, because it just looked like a ball of steel wool. Literally just a ball of metal. I couldn’t even tell what it used to be,” Nick Jewett, sophomore undeclared major, said.

“Every one of our students contributes in no small measure, to the Eagle Nation. The loss of any student, especially in a tragic way, is particularly painful. Losing five students is almost incomprehensible,” Georgia Southern University President Brooks Keel said in a press release.