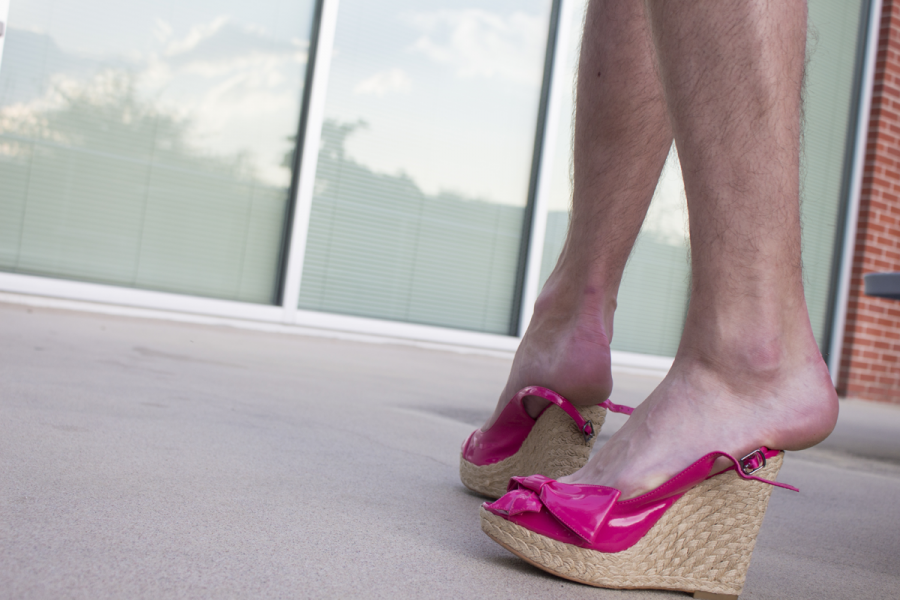 This Thursday, men of all shoe sizes will be able to trade blood, sweat and tears, as they collectively walk a mile around campus in high heels, the double-edged sword of women’s footwear. Why would any sane man subject himself to walking around campus in these uncomfortable deathtraps, especially when it’s more than likely to clash with the rest of his masculine wardrobe? It’s so that they can proudly support awareness for sexual assault, gender violence and rape, by participating in the fun and lighthearted event, known nationally as Walk a Mile in Her Shoes.

The third annual Walk a Mile in Her Shoes event will be located at the Rotunda at 3:30 p.m. on April 9, where a number of fun activities for participants will be held, accompanied by a DJ. In addition, many donors will have booths set up, offering fun giveaways, handouts and educational materials.

“I have been consistently impressed by the level of involvement among the university and community. We always have a huge turnout, with students, police officers, fraternity and sorority members, faculty, staff, and even local politicians. The level of support really shows how much our community cares about victims of rape, sexual assault and gender violence, and how committed we are to stopping the violence,” Laura Agnich, a professor involved with the planning committee, said. “We have raised around $3,000 for SRSAC so far and we hope that this year will be the biggest fundraising year yet. I hope that we can double our donation.”

Before the actual walk begins at 5:00 p.m., two members of Team SOAR (Speaking Out Against Rape) will share their personal stories as sexual assault survivors to the audience. Afterwards a quick “how to walk in heels” tutorial will commence, giving the guys an opportunity to avoid looking silly while marching around campus.

The actual mile walk will take the marchers (which will include men, women and children) from the Rotunda through campus, and back to the Union. Besides having a lot of fun, marchers will be able to read up on some important educational handouts on the two rest stations set up during the walk. Afterwards, registered participants and donors will be invited to eat free food, which will include pizza and desserts. Participants will be happy to know that the money raised through their registration fees and donations will be for the Statesboro Regional Sexual Assault Center, which serves local victims of rape and sexual assault.

“I believe that participants will have a wonderful experience in doing Walk A Mile in Her Shoes. They can expect to leave Walk A Mile with new gained knowledge regarding sexual violence, some burned off calories, tons of laughter and pictures to add for memories and more laughter. I hope this event inspires others to help those who have been sexually assaulted and to encourage victims of sexual assault to be brave and report their assaults to the higher authority and get the help that they need,” Christina Catchings, freshman pre-nursing major who was involved with the planning committee, said.

Rape and sexual violence are some of the most prevalent crimes found on college campuses and are highly under-reported. According to the National Intimate Partner and Sexual Violence Survey, 1 in 5 women and 1 in 71 men have been raped at some time in their lives. Walk a Mile in Her Shoes calls attention to these ugly facts by organizing this walk to raising funds. The money raised will help serve sexual assault victims by supporting Statesboro Regional Sexual Assault Center (SRSAC). SRSAC provides invaluable resources and services, like community education, victim advocacy, and follow-up support, to victims of sexual assault in the Ogeechee Circuit.

“The vast majority of victims of rape and sexual assault are women, which is why it’s so important to see men taking time out to show support by walking a mile in her shoes. That isn’t to say that men aren’t victimized as well. This event raises money for an organization that serves all victims of rape and sexual assault in our community,” Agnich said.

“I think female voices are important and that they should be heard; in fact, they need to be heard. Walk a Mile is really fun and great way to bring attention to the important subject of sexual assault. Unfortunately I don’t think sexual violence will ever completely go away, but hopefully one day we will get to the point where we will be more willing to listen to victims of sexual violence,” Aaron Evans, junior mathematics major who will participate in this upcoming walk, said.

Although people who show up on the fly will still be able to participate, those who register in advance at tinyurl.com/gsuwams2015 will guarantee themselves a pair of shoes in their size for the march, as well as a t-shrit. In addition to the activities planned for Thursday, everyone is also invited to attend a talk being held by the two team SOAR speakers in the Union Theater this Wednesday at 6:00 p.m.