Q&A with upcoming SGA executives about plans for next year 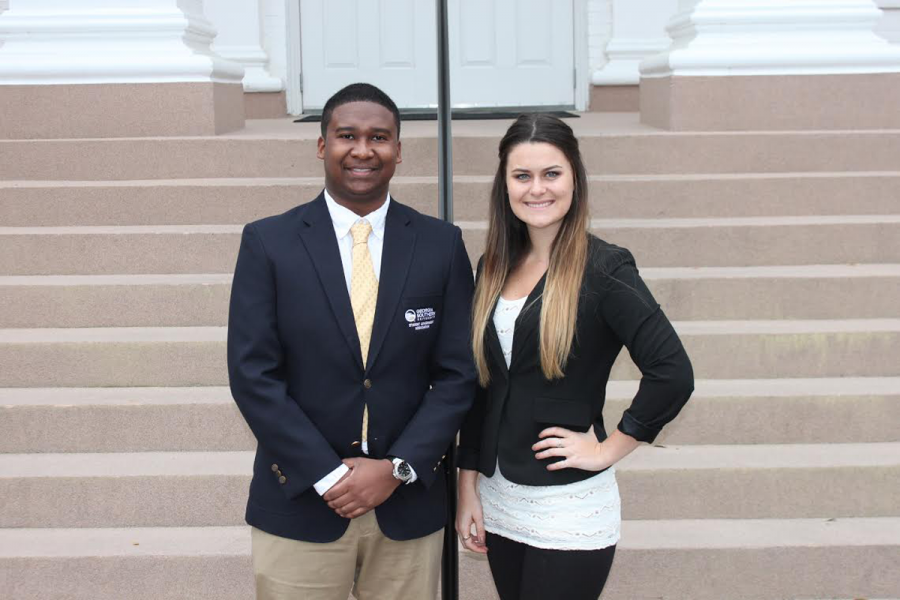 Early this month, Georgia Southern University held its annual election for Student Government, in which the Glover-Kidwell ticket won an uncontested campaign with little opposition. Recently, the George-Anne sat down in the lobby of their Russell Union office, amongst the glittery remnants of the SGA’s “Dancing With The Stars” event. Pushing balloons and promotional QEP buttons aside, President-Elect Charles Glover and Vice President-Elect Kaitlin Kidwell pulled up chairs to talk about their plans for upcoming school year, thoughts on each other, and tangible reform. Here’s the conversation:

The GA: What big changes should Georgia Southern expect with the new Glover-Kidwell Administration?

President-Elect Charles Glover: “Big Changes? Well, we haven’t disclosed a lot of plans as of yet… We have some big ideas about reaching out to students, improving our outreach towards the campus and being able to serve many more students.”

The GA: So you can’t speak to any programs in particular that you’ll be thinking of?

Glover: “Besides our programs that we already do… and some forums that we have… we might run the health services forum coming up again, because the new health center will be finished December 2015… besides the ones that require big events… we can’t really give you anything of what we have planned.”

Vice President-Elect Kaitlin Kidwell: “I think SGA has always been like ‘This is what we’re thinking.’ Well, we really want to reach out to students. You guys tell us what you want us to put on. So I guess that’s where it’s kinda weird, we want to hear from the students first. We want to know what they want. If you want a certain forum, that’s what we’re here for. More of hearing what they want us to do instead of doing what we want internally.”

The GA: You guys were the only ticket that ran. What do you think that says about Georgia Southern, that you didn’t have opposition?

Kidwell: “They way I see it, I’ve always thought of it as a cycle. When you run for Executive Board, you have to be on for a semester before you do it, so it might’ve been the people in it who were really passionate about it and wanted to move up in it either graduated or we’re not reaching out to those people who want to do it, because there are people on campus who want to be really involved.”

Glover: I definitely think it comes in cycles of who’s been ‘training’ if you will… Who is ready to step into that new mantle of leadership. Some people just aren’t ready for that. As you can see from our election, we had about 30 seats. That leaves about 20 seats open for some fresh new blood. I don’t really see it as a negative thing for the students, I see it as a sort of reset button, but not as wildly controlled. I think. [Pause] Let me choose my words carefully. [Pause] I think there needs to be some continuity from one exec board to another, just to be able to beat that learning curve and hit the ground running instead of having to relearn your job again.”

Kidwell: “We took the non-contested election as a really positive thing as an Exec Board because we’ve been able to figure out plans and get stuff thinking and transitioning. So it’s almost a good thing for the students too, because we’ve been set and ready to go.”

Glover: “There was an ‘abstain’ option too. They had the option to say ‘we don’t think you’re really the best for this Georgia Southern Student Body and they didn’t, so…”

The GA: The SGA Board’s last tangible work was Straw Reform, how are you guys going to push to further the tangible aspects of SGA?

Kidwell: “I think that was one of the biggest things that we [pause]. We took the straw thing as like ‘This is what the students want. Lets do it.’ That’s what we want to do next year. Literally, take anything, as small as straws, but that was a big issue for people.”

Glover: “As SGA, we didn’t always do the best job at communicating all the hard work, the goals we’ve set… sometimes these things take time. We hear everyone’s concerns about how it doesn’t make sense… If it’s what the students want, I don’t see a huge issue in it. I don’t see why we can’t push for students interests, if it’ll help them, why not have it?”

Kidwell: “Things take time. One thing that we’re looking into is the attendance policies. If you’re doing something for the school, a university conference or something, that it’s excused. Everything we do takes so much time because we do meet with the administration, we do have to go through the chain of command. We do try to do a lot of things, and tangibly, we do so many services like funding, ShuttleGus…”

Glover: “Offering a free legal service from Troy Marsh, as well as some programming we collaborate with RHA, you’ve seen Mardi Gras Madness, that event. We try to fit the goal of what the student needs at that point and advocate for their concerns and their best interest. Our role is not set in stone, it’s ever changing, but the core of it’s always going to be the services we provide as well as advocacy on their [the student’s] behalf to the administration.”