COLUMN: Social media has been calling for Byington’s job for months now 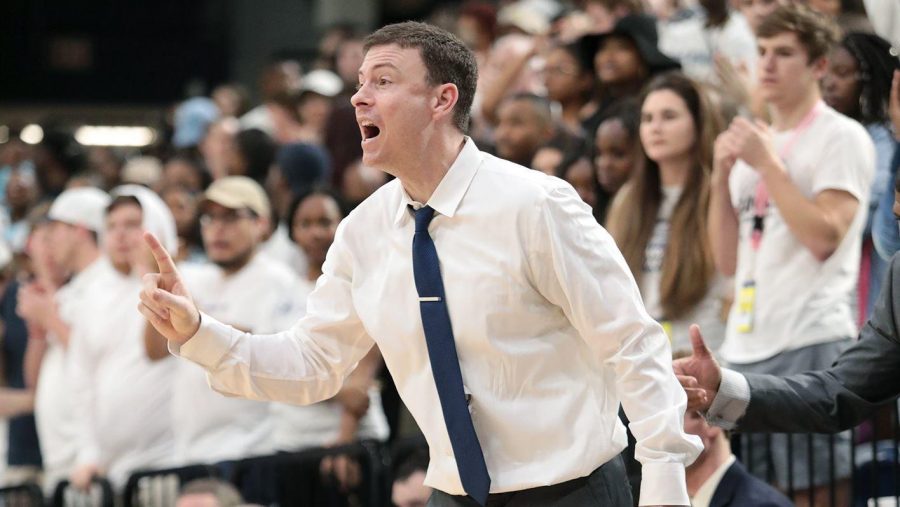 Though he was successful at Georgia Southern, social media has been calling for Mark Byington's job for months.

After a season full of mountains and valleys, the Georgia Southern men’s basketball team finished tied for fourth seed in the conference, which is the worst finish since the 2015-2016 season, accompanied by a 20-13 overall record. GS seemed to be on a roll during postseason play, but their run for a title was cut short due to COVID-19.

With a bulk of offensive talent graduating in May, though the NCAA is discussing the possibility of granting an extra season of eligibility due to COVID-19, GS could be saying goodbye to many key playmakers including Isaiah Crawley, David Lee-Jones, Ike Smith and Simeon Carter. Many have to wonder what’s next for the program with a newly vacant head coach spot.

On Friday, Head Coach Mark Byington resigned in favor of James Madison University. His six-year contract consists of a $350,000 base salary and a $75,000 additional supplement which would cover additional responsibilities. A Virginia native, location was surely an important factor in his decision.

The team was never able to clinch a Sun Belt championship in Byington’s seven years as coach, though the program did have several 20+ win seasons. In 2015, GS did make an appearance in the final game, but it resulted in a 38-36 loss to Georgia State.

Social media users observed that the team had consistency problems and often pointed the finger at Byington.

“I think Byington has been great overall for our program,” Tim Buffkin, GS class of 2008, said. “He’s certainly helped us take the next step from where we are, but now that momentum seems to be gone. Our lineup has been small, and we attempt NBA 3 pointers as if we are a team full of Steph Curry’s, because we can’t penetrate the lane. Being a 3 point shooting team only works if you have a team full of good 3-point shooters…We keep trying it even though we can’t make the shots. We are also one of the worst free throw shooting teams in the nation. Both of those things to me are fundamental and on coaching.”

The team has great stats, but there is not much to show for it. Tookie Brown was one of the best players in conference history, and he didn’t win the Sun Belt any of the years he was at GS. The farthest Brown got in the Sun Belt tournament was the quarterfinals.

The Eagles have struggled with closing out games with large leads. This season alone, GS blew double digit leads at home against both Georgia State and App State.

The team as a whole shot 44% from the free throw line and about 33% from the 3-point line throughout the season.

But, some fans think that Byington did the best with the cards he was dealt. According to @GSouthern_Fball on Twitter, only about 3% of alumni donate to the Athletic Foundation. The account is run by a young alumnus who frequents many GS sporting events.

“I think his resignation is a small blip in the bigger picture of Georgia Southern not being able to afford great coaches,” they said. “The vast majority of Eagle nation was calling for Byington’s job year after year. When in reality he’s a great coach… I always loved Coach Byington and how he was never scared to be honest. It’s too bad our fans didn’t show him the love he deserved. All the best to Coach B! If you’re one of those many fans constantly complaining about our coaching across all sports, let your wallet talk and donate.”

Nobody knows what the future of the men’s basketball program  holds, but it was only a matter of time until Byington would say goodbye to GS.

Elijah Jackson contributed to this article