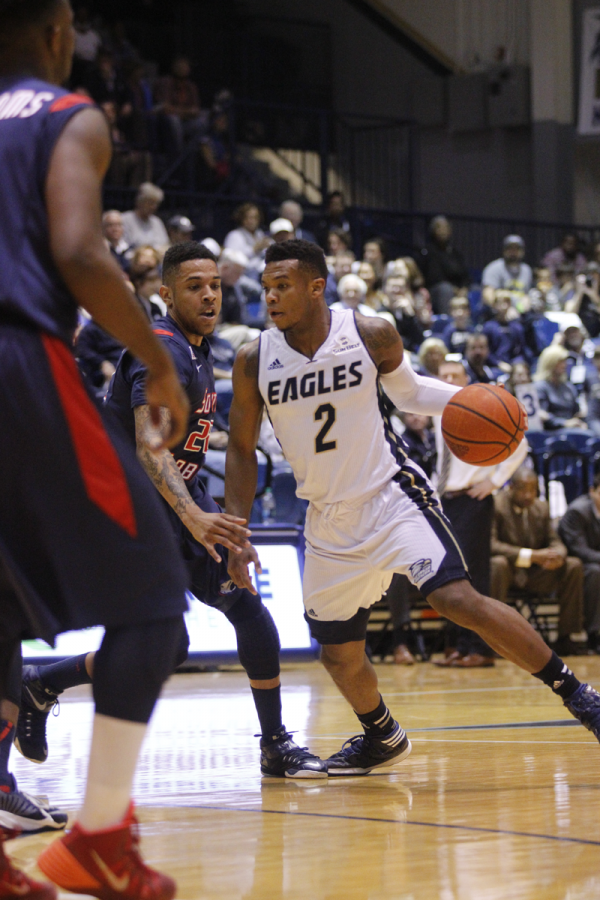 The presence of Georgia Southern’s freshman guard Mike Hughes has certainly been felt by every opponent. He’s a player that is typically surrounded by three or four other seniors and plays to their level.

Hughes came on board in Georgia Southern’s first Sun Belt season. Most people thought this was going to be a bad year for the Eagles and projected them to finish ninth in the conference. However, Hughes, along with the seniors around him, did not pay attention to that or let it get them down.

“I just try to focus on what I need to do to help my team out,” Hughes said.

And helping his team out is exactly what he has done. Hughes has an impressive stat line for a freshman. After starting all 26 of the games the Eagles have played this season, he has racked up an average of 7.9 points, 2.4 assists and 1.5 steals per game while shooting 67 percent from the charity stripe. He has also played more minutes than any other player has on his team, other than Jelani Hewitt.

The Winston-Salem, N.C. native started out playing sports at the age of six. He played basketball, baseball and even gave track a shot.

Growing up in the basketball dominate state of North Carolina may have been hard for some athletes to stand out, but it was not difficult for Hughes. He is a three-time All-Conference selection and three-time state championship MVP at his high school, Winston-Salem Prep Academy.

Hughes also played on Chris Paul’s AAU all-star team, which may have caused other colleges to overlook him due to the other talent on that team. However, head coach Mark Byington saw something in him that not a lot of other coaches did. In fact, his only other offers came from Gardner-Webb University and Radford University.

In the end though, Hughes felt at home in Statesboro, surrounded by the people already on the team and the coaches that would be leading the way.

“It [Georgia Southern] felt like the best place to be,” Hughes said. “It’s been pretty good chemistry-wise. Since day one, we really clicked. I was surprised actually.”

The team has welcomed Hughes and they have been able to teach him the ins and outs of college basketball. He has improved throughout the year and that has been evident on the court.

“I’ve learned a lot from the team and the coaching staff,” Hughes said.

Hughes will continue to learn and improve throughout his years at Georgia Southern. He plans to graduate with a degree in sports management, but would ultimately hopes to follow his dream of playing professional basketball if the opportunity arises.