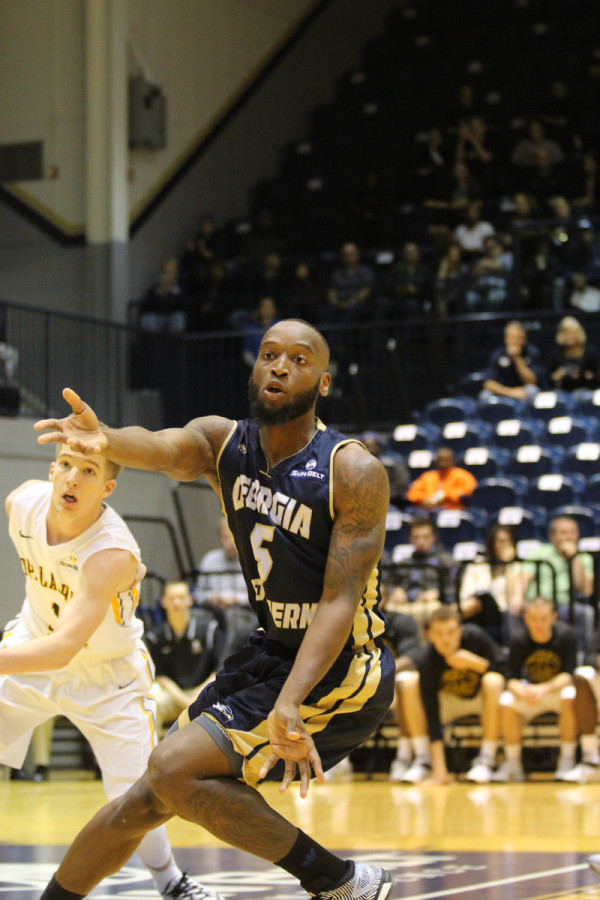 The Sun Belt Basketball Championships begin today at Lakefront Arena in New Orleans, and No. 2 seed Georgia Southern is two wins away from its first NCAA Tournament appearance since 1992.

The last time that Georgia Southern made it to the big dance, guard Jelani Hewitt was six months old.

“I’m very excited going into this tournament. We put ourselves in a great position throughout the regular season…I’m just looking forward to making history,” Hewitt said.

Head coach Mark Byington said that in his first team meeting with the players last summer, he talked about making it to the NCAA tournament.

“That’s the goal. We talked about it, we didn’t hide from it and now we’re in a good position to go get it,” Byington said.

They are in good position; however, they would be in better position if they had been able to beat Georgia State last weekend.

“We finished the season with a bad taste in our mouth. We’re really ready to get rid of that taste and go get a couple of wins,” center Trent Wiedeman said.

Georgia Southern made too many early mistakes against State’s zone defense and never recovered. 10 first half turnovers put the Eagles down 34-21 at halftime before they lost 72-55.

With the easy victory, Georgia State provided a blueprint to every other team in the tournament on how to defend the Eagles.

The game had big implications, but after they lost, Byington said the team did not dwell on it.

“We moved on quick. The guys left every single thing they had on the court…it just wasn’t meant to be,” Byington said. “We have everything in front of us. Now all our hard work has got to be shown on Saturday in New Orleans.”

The team practiced on Monday and Tuesday in Hanner Fieldhouse, and left yesterday morning for New Orleans. They will practice today and tomorrow in Lakefront Arena before Saturday’s game.

They don’t know who they’re playing, so Byington will have his team prepare for each possible team this week.

Once today’s game between USA and UALR is over, they will trim down their focus to just two teams.

Hewitt doesn’t mind not knowing who they play. Even though they will prepare for each team, he said the main focus of this week’s practice leading into Saturday is worrying about themselves, not the other teams.

He doesn’t see it as a disadvantage.

“It doesn’t make it harder because now we’ve got to focus on the stuff that wins basketball games. The little things – taking charges, rebounding, boxing out, rotating on defense,” Hewitt said.

It also is a chance to adjust to life without forward Angel Matias. Matias broke his right foot against Louisiana-Lafayette on Feb. 28 and will not play again.

The Eagles have played two games without Matias, so they know what they have to do to compensate for his absence, but knowing and doing are two separate things.

“Angel brought so much to the team we can’t just replace him. There’s going to have to be multiple guys stepping up,” Wiedeman said.

His 15 points and nine rebounds performance against Texas-Arlington played a major part in winning that game.

In his freshman campaign last year he averaged 21 minutes per game on the floor and scored 5.1 points per game, but his playing time has been cut in half this year. He has only played about 12 minutes a game this year.

Doyle knows his time to make a big impact has come.

“I was ready regardless, so now I’ve just got to step up. If you stay ready, you ain’t gotta get ready,” Doyle said.

Doyle is 6-foot-6, 210 pounds and can get to the rim easily. He isn’t as strong as Matias, but his height and athleticism allow him some of the same scoring opportunities.

Doyle’s best chance to make a difference on Saturday is on the glass. If he can pull down five or six rebounds in 15 minutes on the floor, he will help put Georgia Southern in a position to win.

Depth on the Court

The Eagles had their worst rebounding night of the year against Georgia State. They only grabbed 23 boards against the Panthers, the fewest all season.

“We weren’t aggressive enough. We should have been throwing the first punch instead of taking the first punch,” Doyle said. “Coach said two big keys [for Saturday] would be getting stops and getting rebounds.”

With Ferguson starting, that leaves Doyle and guard Curtis Diamond as the main players coming off the bench. Georgia Southern will essentially play with seven players in the tournament.

“We’re not as deep as we were a couple weeks ago. The fact that we’re going to play a team that played the day before, hopefully it helps,” Byington said.

He said that sometimes coaches get nervous about having a bye because that means they automatically play a team on a winning streak, but this isn’t one of those situations. He is happy they have earned a spot in the semifinals.

Mike Hughes said, “We’re definitely in a good position but we’re not satisfied. That’s one thing I can say about this team and that is that we don’t give up easily.”