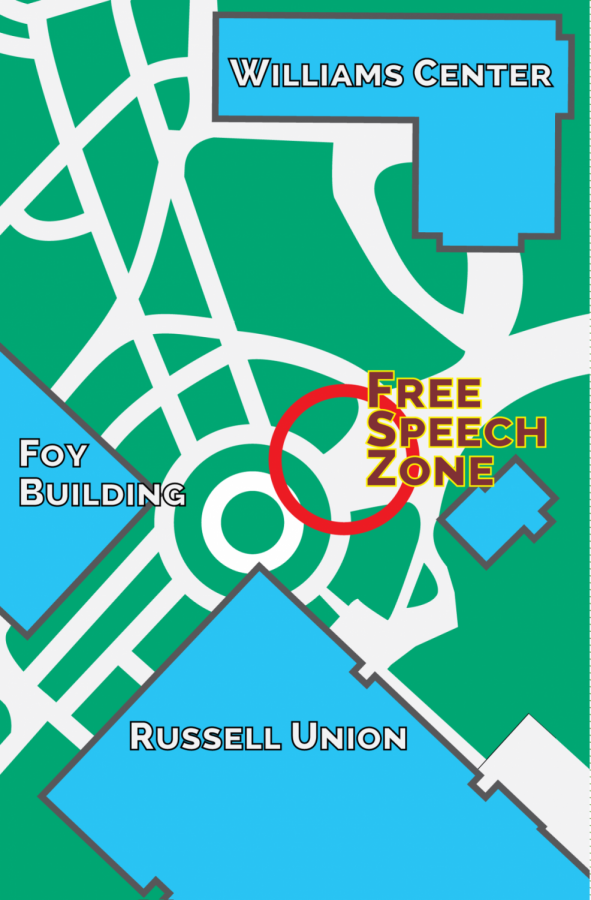 " />
Kurt Hanlon
A quick reminder of our Free Speech zone and why it’s important.

As the weather gets warmer on Georgia Southern University’s campus, the students are reminded of the designated ‘free speech zone’ on campus.

Free Speech zones are specific areas on campus that are designated by the university as places where members of the public can come and speak on almost any subject they wish.

Free Speech zones arose in the 1960’s and 70’s, and were mainly used by students in order to protest the ongoing Vietnam War. Since then, Free Speech zones have become a mainstay at public universities, although this has been met with some controversy by organizations that maintain that the entire university should be a Free Speech zone.

GSU has only one zone where the public can speak freely, a small area in between the Russell Union and Williams Center. However, this only applies to members of the public, not members of the university, Dr. Vince Miller, Vice Associate Vice President of Student Affairs and Enrollment Management, said.

“By policy, any Georgia Southern student, faculty or staff has the right to assemble anywhere on campus,” Miller said. “So if you have anything you want to speak, to display, to protest for or against, you can do that anywhere. It’s the public access to campus for the purpose of freedom of speech [that the zone pertains to].”

In theory, anyone can come and speak once they’ve filled out a reservation form to schedule, but certain rules are thrust upon the speakers. According to the Russell Union policies web page, advocating the overthrow of any government, the willful damage or destruction of property, the disruption of the University’s regularly scheduled functions, the physical harm, coercion and the intimidation of the University’s faculty, staff or students will result in the speaker being stopped and immediately removed from campus.

However not all speakers are as intense as the Genocide Awareness Group displaying aborted fetuses in a large billboard format. A local Jehovah’s Witness group has reserved the spot for every Wednesday this semester, quietly handing out biblical literature to curious students. In fact, use of the free speech zone is notably low for the university.

“We don’t see it very often,” Miller said. “For whatever reason…generally speaking, we don’t see a lot of reservations.”

Dr. Miller believes the free speech zone is an important part of campus life, whether students enjoy hearing speakers or not.

“It’s not something we could have tucked away in a corner. We’ve got to be fair to the freedom of speech, and we are obligated to protect that speech,” Miller said. “Even if facets of the campus say ‘they shouldn’t be here,’ or ‘they can’t say that’…they can, and they’re protected by law.”

Students at GSU are generally positive to the idea of the free speech zone.

“I think the Free Speech zone is a good thing,” Dani Williamson, sophomore nursing major said. “Some people could find what others are saying as insulting, but they are free to say whatever they feel too.”

“I think if you cross a line where you’re trying to incite violence, or you know you’re trying to illicit a really negative response, like hate speech…that shouldn’t be allowed,” Brooks Metzler, senior writing major, said. “But that’s a tough line to draw.”