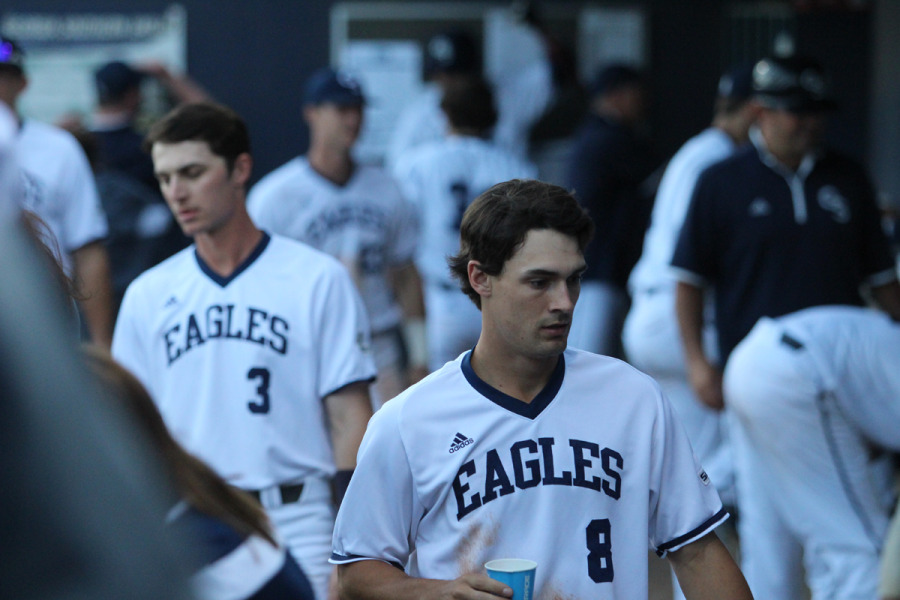 Since the season is halfway over, it is time to look at the Georgia Southern baseball team and see who is standing out for the Eagles, shedding light on some of the players that are performing well.

It is hard to talk about the best baseball player on a team without mentioning the guy with the best batting average. For the Eagles, that is senior C Chase Griffin. The six-foot, 190-pound senior has started every game this season and boasts a .319 batting average. He has been at the plate 116 times and produced 37 hits, three of which have been home runs. It is safe to say that his senior season is off to a good start.

However, the most dominant player at the plate might be senior OF Aaron Mizell. He is carrying a .305 batting average and the saying ‘dynamite comes in small packages’ has never been more true. The 5-foot ten-inch, 155-pound senior leads the team with eight homeruns, four of which came over the span of just six days. He also leads the team in just about every other category. He has recorded three triples, eight doubles, 25 RBIs, 28 runs and 118 plate appearances. There is not much that Mizell, the smallest guy on the team, cannot do.

Even though those two have been instrumental to the game, one player cannot go without being mentioned – redshirt junior OF Hunter Thomas. Thomas has a .276 batting average with 29 hits and five home runs. However, that is if you only look at the stat sheet. Possibly the most impressive thing about him this season is simply the way he plays tacked onto his reliability late in the game. He has already produced two walk-off hits for the Eagles – a feat that had his teammates chasing him into right field.

“Hunter has done a good job for us all year. I mean, you know what you’re going to get from him. I think he provides great leadership for our team, and certainly he’s had some big hits during the first half of the season. He’s a guy that can help us be at our best down the stretch,” head coach Rodney Hennon said.

Moving from the plate to the mound, there are a few players that really stand out. Redshirt sophomore RHP Evan Challenger holds a 1.02 ERA on the season and has done very well after coming off an injury and surgery that held him out last season. Challenger has been getting the Friday starts and has a 2-0 record in his six appearances. He has also been able to pick off four base runners and strikeout a total of 27.

Another player that stands out is junior LHP Jason Richman, a reliever that has done well in his third season with the Eagles. His 3-0 record is the best on team and he has gotten there by retiring 32 batsmen at the plate. He has made the most appearances, so it is clear to see that the team counts on him and is able to trust that he is going to get the job done no matter where they are in the game.

Additionally, junior RHP Chris Brown has produced some promising results. Brown typically comes in late in the game and closes for the Eagles. He has tallied six saves so far and has done very well in his first season with Georgia Southern after transferring from Chattahoochee Valley. While there, he collected eight saves over two seasons. He is well on his way of matching, if not surpassing, that record in just one season with the Eagles.

“Chris has done a good job in that closer role. Certainly that’s going to be big in the second half of the season, so we’re going to just need him to keep improving,” Hennon said.