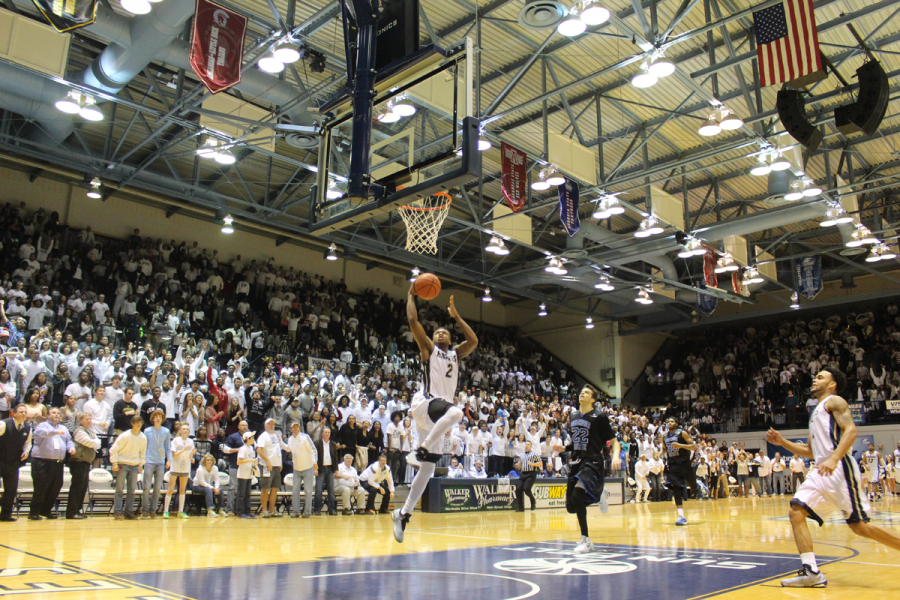 Guard R.J. Hunter sunk two free throws with 21.6 seconds left in the game to win it for the Panthers. Forward Eric Ferguson’s last-second three-point attempt for the Eagles was inches away from banking in to win the game.

“We were about as close as you can get. An inch or two here or there and we win the game. I feel bad for the guys because they’ve given me everything they had this year. I wanted them to have that moment,” head coach Mark Byington said.

Georgia Southern was playing in its first conference finals since 1992, when the Eagles beat Georgia State to win the TAAC Championship. That was the last time the school has been to the NCAA Tournament.

The 38-36 loss was the lowest scoring game in Sun Belt conference history in the shot clock era.

Byington said this year’s team is one of the closest groups of friends on and off the court he’s ever coached. The word ‘family’ gets thrown around a lot when these players talk about each other.

When the last shot bounced off the rim and the Georgia State bench rushed the floor, Hewitt and Ferguson hugged each other. Multiple guys didn’t try to hide their tears. A Sun Belt official had to tell Diamond to get up and leave the court.

If Merriam-Webster dictionaries used videos to define words, the scene after the loss would play next to the word heartbreak.

For many of Byington’s players, that was their last game in a Georgia Southern uniform. Guards Jelani Hewitt and Curtis Diamond, forwards Angel Matias and Ferguson and center Trent Wiedeman were the core of the team and they all graduate.

“You put in months and months of work, and years and years for some of these guys, to try to have a moment like this, and we were close,” Byington said.

Byington deserves a lot of credit for the turnaround of this program since he’s been here. The Eagles have now reached the semi-finals of a conference tournament two years in a row. Before that, they only appeared in three semi-final games in the last 20 years.

“Last year I tried to do the best we could of establishing a culture of trying to do things the right way…I had to get a group of guys that believed in my vision and what I wanted to do and where I wanted to go,” Byington said.

But that wasn’t the only disappointment. The Eagles were not invited to play in the NIT – the secondary NCAA postseason tournament. However, teams like Arizona State (17-15), Alabama (18-14) and Pittsburgh (19-14) were invited.

Regardless of how the year ended, something happened for Georgia Southern basketball that hasn’t happened in years. People were genuinely excited. Hanner Fieldhouse had sellouts. The Eagles were actually playing for something down the stretch.

Georgia Southern now has title contenders all year round.