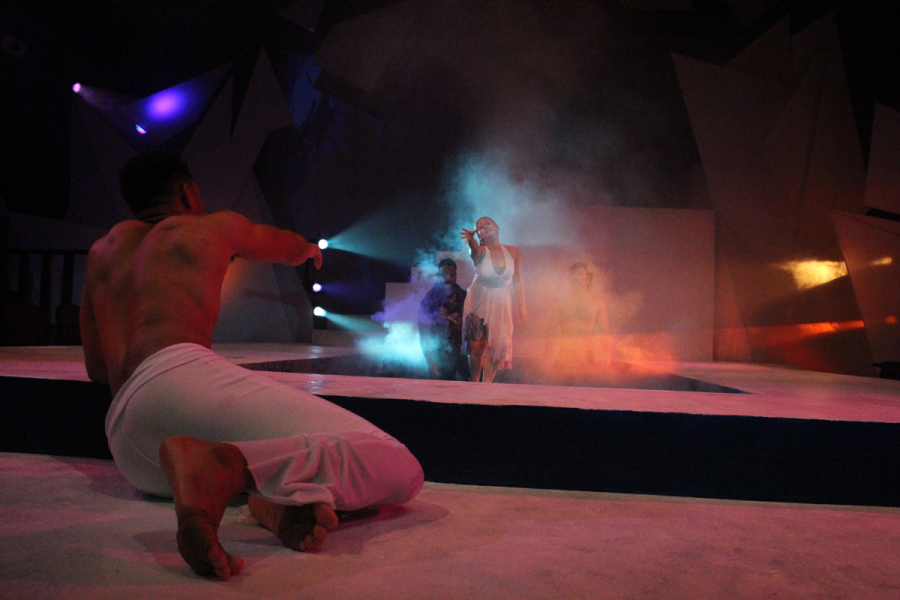 Two days before the opening night of “Metamorphoses,” set designer Olivia Carter politely tosses out notes and suggestions to her crew. Her demeanor remains as calm as the surface of the pool in the center of the Black Box Theater.

Carter’s extravagant set looms overhead, a geometric collage of sharp angles and projected color. Each crystalline column and hovering piece of the installation has been carefully adjusted and readjusted during the past week of intensive tech rehearsals. Her voice is calm amidst the whirring of power tools that echoes through the Center for Art and Theatre.

“People keep asking me, ‘Are you stressed? Are you worried?’, but I’m not. I’m actually really calm and chill, which is strange and not normal for me,” Carter said.

Carter’s road to “Metamorphoses” began almost a year ago, when director Lisa Abbott named the show as one of the theatre department’s mainstage productions for spring semester. Abbott chose the production because of its postmodern style, and because it offered her a chance to feature dancing and extensive choreography onstage.

“The director always works closely with the designers. Olivia and I have been discussing the show since last spring. As a director I set the framework for the show so that the designers work within the same idea to give unity to the show,” Abbott said.

Carter worked extensively with Abbott while researching, interpreting and conceptualizing the set. “Metamorphoses” is a postmodern take on the mythology from “The Metamorphoses of Ovid,” a collection of Ovid’s myths spanning the beginning of time to the reign of Julius Caesar. American theatre director and playwright Mary Zimmerman chose to bring seven of Ovid’s tales to life in her postmodern theatrical version of “Metamorphoses.”

This show was Carter’s first venture into set design. As a senior honor student, she is required to produce an honors thesis before she graduates in the fall. She will be presenting “Metamorphoses” as her honors thesis. A student set designer in a main stage production is somewhat unheard of at GSU, but Carter knew what she was getting into.

“This is a big show to have a student design for, especially for a first time designer. I like challenging myself. I like taking on too much. I just like that challenge,” Carter said.

Carter was in luck. Zimmerman’s play calls for a potentially challenging set feature: a shallow pool in the middle of the stage. The pool itself is a centerpiece for the performance, and acts as both a platform for acting and dancing, and as an ever-changing set piece. Over the course of the performance, the water is used to represent the extravagant pool of King Midas, the River Styx, a washing basin and even the watery wrath of Poseidon.

Her research process was meticulous and specific. Abbott suggested that she look into the minimalistic, representative styles of non-illusionist designersAppia and Craig. To further connect the performance to its roots in Greek mythology, Carter based the color palette of the set on the blue and sandy white rooftops of Grecian islands bordering the Aegean Sea. She wanted to find a better way to show one character, Myrrah, dissolving into tears.

Carter explained that while developing her idea, she refused to watch any other productions of “Metamorphoses” because she didn’t want to accidentally steal the ideas of other designers.

In addition to the pool, a “Metamorphoses” production usually features a chandelier hanging from the ceiling. The hanging geometric installations of Carter’s set are a nod to the chandelier; she explained that the angular shapes better fit her vision for the moving, ever-changing set.

As the title implies, the central theme of “Metamorphoses” is change. After researching the show and consulting with Abbott, Carter found ways to apply that central theme to Zimmerman’s semi-aquatic production.

Carter extended the pool, and added a deeper section that would allow actors to enter and exit the stage from underwater. The swim-under entrance opened a lot of doors for Abbott’s staging and blocking as well: Myrrah could now melt into tears and seemingly dissolve in a cloud of fog and mist; Poseidon could rise from the depths, trident in hand, as he destroys Ceyx’s ship.

“It’s fun. I’ve been coming to a lot of rehearsals, just because it’s fun to watch the actors work with the set,” Carter said.

The art of set design is one of collaboration, and many teams of people have to coordinate in order for a show to work. Both Carter and Abbott stress the importance of working with people from other aspects of the production to achieve the spectacle that is “Metamorphoses.”

“We have to work together to meet the needs of the text, the actors and the director’s ideas for movement and blocking,” Abbott said.

“The biggest difference between making individual art and art in the sense of theatre is the collaboration. It isn’t so much: ‘Yay, I did it! as it is: ‘Guys, look what we made,’” Carter said.

When Carter talks about what she and her crew made, she speaks modestly and passionately. Her work is mostly finished at this point, spare a few slight adjustments after the final pair of rehearsals. Carter’s set, as well as the rest of “Metamorphoses,” will be in the Black Box Theater until March 11.

Carter said, “I’m just excited for everyone to see it, because we’ve all worked so hard on it. It’s beautiful.”