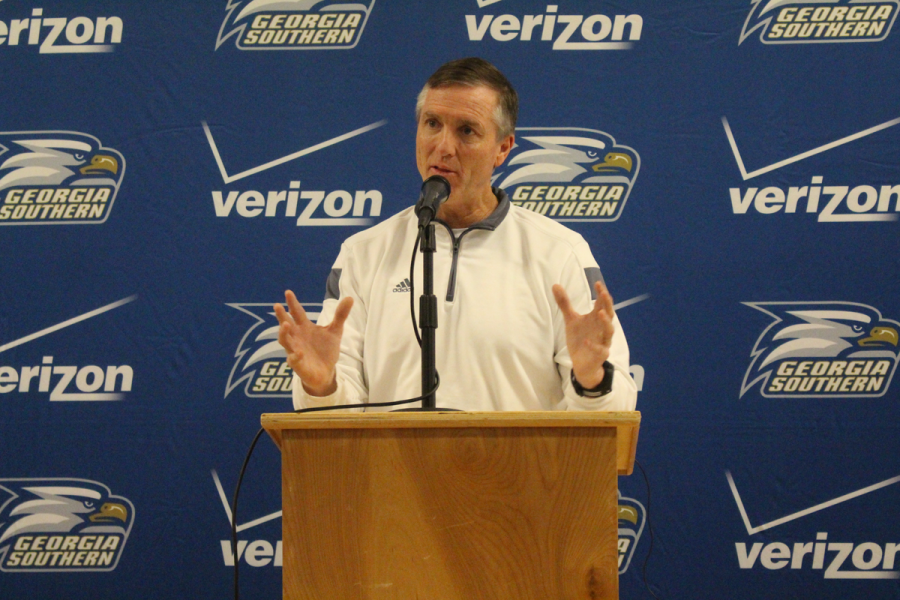 It has been nearly two months since the Eagles clenched the Sun Belt conference title and excitement is already brewing for the 2015 season as signing day has brought one of the best recruiting classes in school history.

Head coach Willie Fritz entered the program last year with precious time before signing day and was able to assemble a respectable class filled with a lot of potential. Now, after having a full season and offseason of recruiting, he has been able to assemble a class littered with three and two-star talent.

“The big thing we noticed that was different between last year and this year was time. We already had commitments and we ran with those. This year we were able to get into the schools, contact the kids, bring them on visits and campus,” Fritz said.

Typically, when a coach at the FBS level recruits, they are preparing for the future. That was much the same this Signing Day, except for some of the talent that can make a difference right away for the Eagles. Three-star prospects took up 13 of the 22 scholarships, and a lot of them chose Georgia Southern knowing they would be starters for other teams in the conference immediately.

“Our exposure, six nationally televised games and the rest could be watched on ESPN3, really helped our brand. Obiously our facilities helped us. The guys being able to see these facilities when they came on visits or to games drastically helped,” Fritz said.

With talent coming on both sides of the ball, many players will be able to have immediate impacts while others will have the chance to learn behind some of the best football players Georgia Southern has seen. For example, three-star quarterback Hampton McConnell is a great talent who is able to make plays with his arm and his legs. He will have the opportunity to be redshirted and learn the offense behind quarterbacks Kevin Ellison and Favian Upshaw.

The same could be said for running backs Eric Montgomery and Wesley Fields. Both have big play ability that Fritz could use next fall, or have them watch the tandem of Matt Brieda and L.A. Ramsby to duplicate their success in the future.

With every recruiting season comes some athletes who flip their commitment. Three players were lost to schools over the weekend, which were Georgia, Northwestern and Nebraska. Sometimes, losing players can snowball into bigger problems, but it doesn’t bother Coach Fritz.

“I don’t panic. I’ve been doing this for 23 years and this is my twenty-third recruiting class, and I did it for 11 years as an assistant. We are going to play with the guys we get,” Fritz said.

The Eagles were also able to net two transfers. The first being Max Magana out of Feather River College. He will have two years of eligibility remaining. Standing at six-foot-six and 290 pounds, Magana can add to the offensive line immediately and will have a major shot at seeing time this fall. Another player that has potential to make a difference is UAB transfer Roscoe Byrd. After his former team disbanded their football program, Byrd had one year of eligibility remaining and can join the Eagles without having to sit out the usual year for transfers.

“Each kid I talked to today, after I told them congratulations, I told them to start working with the intent of playing next year. We are not in redshirt business. If they are good enough to play, they will play next year,” Fritz said.

The most exiting thing about this recruiting class is that they share the same vision and foresight of the Eagles. It would be easy for recruits to get lured to the bigger name schools with established D-I FBS traditions, and some were. However, the recruits that signed with the Georgia Southern Eagles have the ability to see that something special is happening in Statesboro, and that they will help us do it one more time.