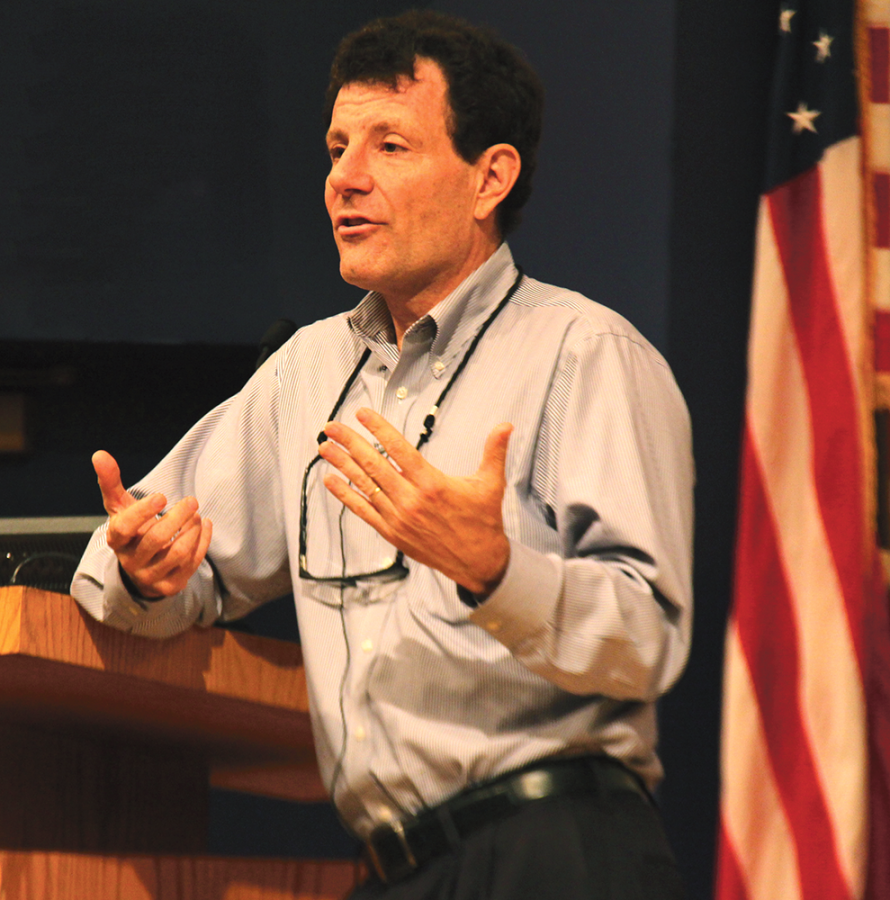 Kristof, a two-time Pulitzer Prize award winner, will base his talk off his newest book (co-authored with wife Sheryl WuDunn), “A Path Appears: Transforming Lives, Creating Opportunity” which takes an in-depth look at the way individuals can influence the world they live in by creating opportunity for others.

“I’d like to see more students be aware of global issues and try to make a difference. Partly, that’s to empower others half a world away, but also because to be an educated person in this country, you also need some knowledge of and interaction with the rest of the world,” Kristof said.

Kristof and WuDunn became household names with their bestselling 2009 book “Half the Sky: Turning Oppression into Opportunity for Women Worldwide” which discussed the specific ways in which the world stacks the odds against women.

GSU’s Student Abolitionist Movement was one of the driving forces behind bringing Kristof to campus. Dedicated to the eradication of human trafficking worldwide, SAM president Claire Torell felt Kristof would be the perfect person to speak to students on the subject.

Torell thinks that Kristof’s talk will help students see human trafficking in a different way, as a system that abuses the most vulnerable, rather than a series of personal choices.

“He has worked with this issue for so long. He’s worked in Darfur, he’s worked with Tiananmen Square If there’s been a social justice issue, he’s been on top of it,” Torell said. “So it makes sense that with this one being one that affects millions and millions of people all across the globe, he is a great voice for that.”

The event will be held in the Performing Arts Center at 7:00 p.m. Monday, February 23.

According to prosecutors, the women were Latin American nationals enticed to America with promises of a better life. Once inside the country, they were held prisoner and forced to perform sex acts on up to 50 men a day.

“We want to shine a light on the fact that not only does [slavery] still exist, now more than ever,” Claire Torell, president of the Student Abolitionists Movement, said. “Numbers are over 27 million people in the world are enslaved and we don’t even recognize that slavery exists in our country.”

Part of the issue is that 21st century human trafficking looks different from the idea of slavery people have in their head. People “need to see shackles,” Torell said.

Nicholas Kristof, Pulitzer Prize winner and New York Times columnist, who will be addressing students at Georgia Southern University this Monday, has written extensively on the issue. In his book Half the Sky: Turning Oppression into Opportunity for Women Worldwide, which he wrote with his wife and partner Sheryl WuDunn, Kristof tackles some of the systematic issues that lead to women making up more than 70 percent of human trafficking victims.

Kristof thinks that journalists should work harder to bring light to the reality of human trafficking.

“I think we in the news media can do a better job, and any of us can raise the issue in our conversations with others,” Kristof said. “Part of the problem is that it’s an ugly issue that we tend to avert our eyes from; I’d say we have to look squarely at it.”

“That just means that people are doing something that they don’t want to be doing by force, fraud, or coercion and that takes so many faces,” Torell said. “But people want that gory story of the gun to your head.”

Last summer, Torell had the opportunity to work with boys in Thailand who had been sex trafficked from a young age. She said that a lot of people she spoke to about her experience wanted justification for the boys’ actions.

“People asked me ‘What’s making them do it?’” Torell said. “Well, how about the fact that they’re orphans that were kicked out of school when they were eight years old and had no other option than to be out on the street?’ To me, that’s not a choice and that will never be a choice.”

The Student Abolitionist Movement wants to make the fight against slavery everyone’s fight. Last semester, the organization hosted an event called “Do what you do in the direction of freedom” that tried to encourage students that no matter their area of study, they could work to stop human trafficking.

“Every single major has a huge impact on the future of human trafficking. You don’t have to be the nurse that goes and repairs genital mutilation in Africa,” Torell said. “You can help in your own hometown, just being aware of the signs. You want to be a business owner, you can make sure you’re getting sources that are ethical . . . anything you do you can do in the direction of freedom.”