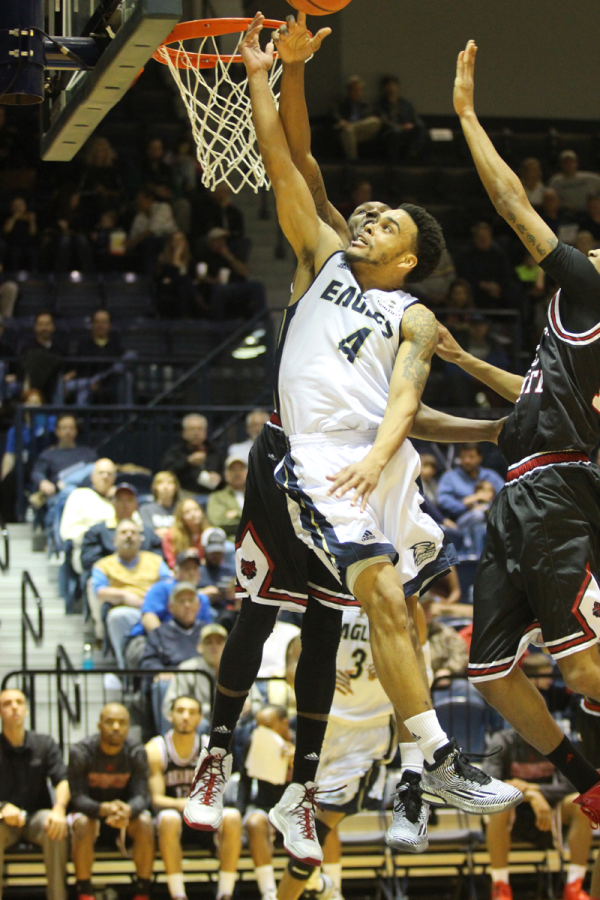 The Georgia Southern men’s basketball team (18-5, 11-3 SBC) sits just half a game behind No. 1 ULM, and with just five more games left to play this season, the Eagles will have to work hard to take control of the Sun Belt.

Georgia Southern has produced impressive numbers throughout the season and surpassed most of Eagle Nation’s expectations. The Eagles currently have the best scoring margin in the league, winning by just over 10 points each game while holding their opponents to 60 points per game.

With the addition of big man Trent Wiedeman and the height from Eric Ferguson this season, the Eagles have been able to rack up 881 rebounds, averaging out to 38 per game. In addition, the defensive quickness around the perimeter has enabled Georgia Southern to record numerous steals, eight per game up to this point.

Redshirt senior Jelani Hewitt leads the team with a total of 434 points, which comes out to about 19 per game. He also leads with 61 steals, double the amount that his next closest teammate has. Furthermore, he has tallied 87 assists and boasts an 85 percent free throw percentage on a team that struggles in that area.

Leading the boards for the Eagles has been redshirt senior forward Trent Wiedeman with 139 rebounds and senior forward Angel Matias with 127 rebounds respectively. Wiedeman also leads the team in blocks with 21.

The Eagles are set to play Troy once again, who upset them after they gained the No. 1 spot in the conference for the first time on Jan. 17. Georgia Southern will also have to face South Alabama, App State, ULL, UT Arlington and Georgia State over the next three weeks before the Sun Belt Tournament.

Georgia Southern should not have much trouble beating Troy, App State or South Alabama with their 4-10, 6-8 and 7-8 conference records respectively. As for the other three games, a win will not come easy, but is definitely possible.

If the Eagles are able to win at least half of the remaining games, they could finish the season with a solid 14-6 conference record, which could place them as high as a No. 4 seed in the conference tournament.

Being the No. 4 seed would give the Eagles a bye in the first round of the tournament. They would go on to play the winner of the No. 5 seed versus No. 8 seed game, and with a win in that game, the Eagles would take on the No. 1 seed.

It looks like there is a bright future for the Eagles in the conference tournament. Being a No. 4 seed is a low assumption for Georgia Southern, but it could happen. No matter what though, the Eagles should do well during their first Sun Belt tournament.