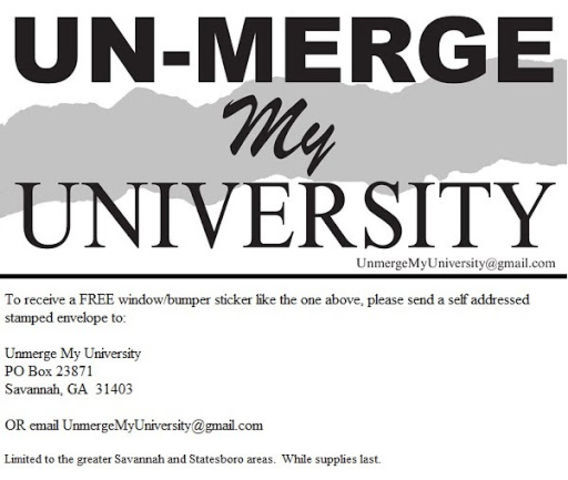 Un-merge My University campaign is gaining popularity on the Armstrong campus.

STATESBORO — After the merger in 2018, members of the Armstrong campus have started to express their desire to no longer be associated with Georgia Southern.

Un-merge My University started in December of 2019. One of the reasons for this campaign is public outcry.

“An association consisting of alumni and other interested parties has been formed for the purpose of reversing the merger,” their website reads. “When the consolidation was announced, private donations for the Savannah institution went to zero. The people of Savannah are outraged confirmed by newspaper, internet, radio and television accounts, and word of mouth.”

For more exposure, they have stickers for your vehicle available for free on their website.

They urge supporters to order them as well as spread the word about the campaign through verbal communication and open letters to news outlets.

Some people at Armstrong spoke out about the merger in the comments of this article, including faculty and staff of GS.

“The merger has been a disaster,” Armstrong Biology Professor Brett Larson said. “Powers that be, like Don Waters and Shelly Nichol, must have thought they needed a reason to justify their positions. It has not saved a dime. It has been misery all around.”

History Professor Jon Bryant of the Statesboro campus agrees with the downfall of the merger but pointed out that GS isn’t to blame.

“Georgia Southern did not force itself on Armstrong… this was a shotgun wedding conceived in Atlanta,” Bryant said. “Most Georgia Southern alumni, faculty and students would also like to un-merge. Forcing two very different schools that serve different populations together has been a disaster.”

The merger has also affected enrollment rates on the Armstrong campus. Since the merger, enrollment at Armstrong has been down 20%, according to their website.