No cell phones in Sanford Hall 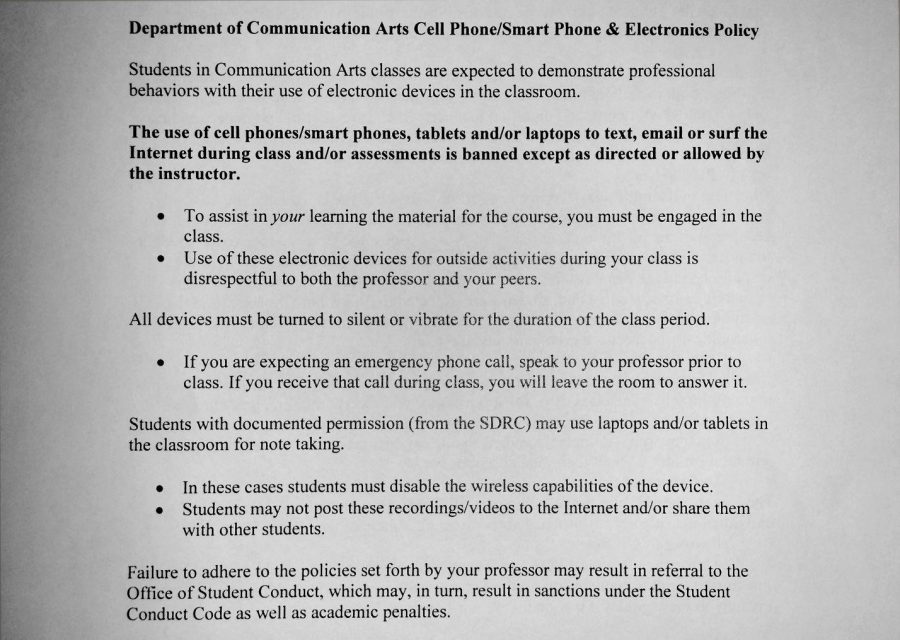 The communications majors that tend to find themselves spending most days in Sanford Hall may need to begin rethinking whether or not bringing their cell phones to class is the best idea.

Effective as of January 12, 2015, the Georgia Southern University Department of Communication Arts is implementing a new Cell Phone Policy which prohibits students from using their mobile devices during class unless directed to do so by their professor.

During the Fall 2014 semester, a committee of communication arts professors decided to come up with a new cell phone policy in Stanford hall to reduce classroom distractions, increase student participation and provide a better learning environment. Several of the professors in the department are concerned students use their phones in class to do things unrelated to course material such as text and surf the internet. They feel that class engagement helps them to understand what concepts the students grasp and in which areas they are still struggling.

“As professors we kind of feel like we are fighting for the attention of our students and classes are boring when students do no participate,” Dr. Camille Broadway, Communication Arts Department professor, said.

The policy allows and encourages students to inform their instructors prior to the start of class if they are expecting a phone call during class; at which point they may step in the hallway to use the phone. Students caught on their phones will be warned and if they continue to break the policy they will be sent to the Office of Student Conduct for further punishment. Each instructor is allowed to have a more strict policy in regards to the use of cell phones and electronics in their specific classroom.

The professors in the department also said they feel this policy will be effective in reducing the instances where cheating may take place. Research has proven that 50 percent of college students use their smart phones to cheat on exams and in class assignments. Statistics also show that 70 percent of students admit to seeing their peers use their phones to cheat. The instructors know that the policy will not eliminate cheating but it will certainly reduce it.

Students in the Communication Arts program and others who have classes in Sanford Hall have stated that the policy is harsh and unnecessary. Some students say they don’t use their phones to be academically dishonest, but to take notes, view lecture slides and define words.

“I understand that phones and other electronics can be a distraction in class but we are all adults, the fact that using your cell phone is punishable by judicial review is too harsh,” Jordan Kelly, junior multimedia journalism major, said.