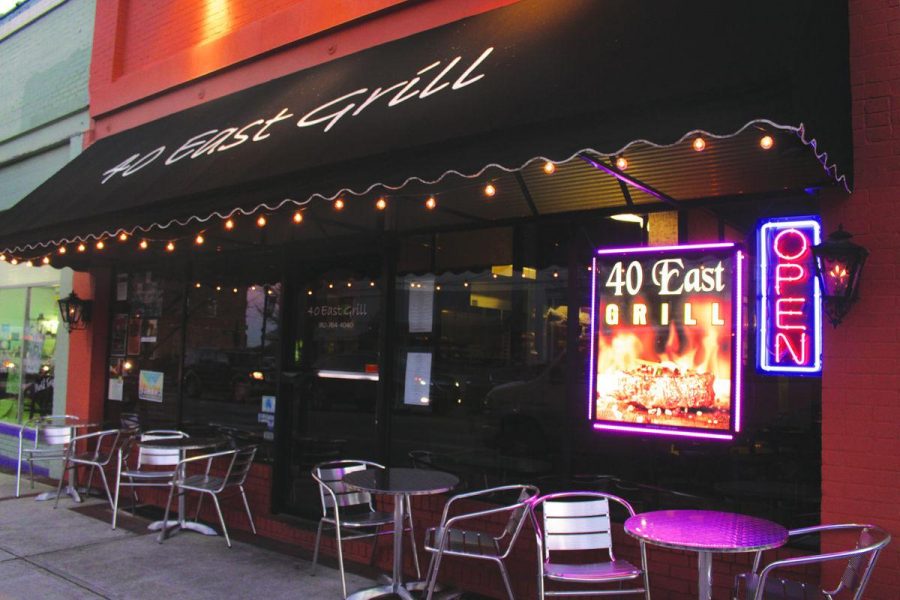 Could you speak to your relationship with the Georgia Southern Community?

Spikes Sports Bar & Grill- “Well, I’m a graduate of Georgia Southern, I have a father who was a professor at Georgia Southern, all kinds of siblings who are part of that alumni…I feel incredibly linked to the student body and both the alumni groups that are part of that and all the folks that will soon come to be. I think every business owner in Statesboro recognizes that Georgia Southern is the heartbeat of everything that allows those businesses to exist, so finding ways to serve that group is good business sense,” Darin Van Tassell, owner, said.

40 East Grill- “I think we have a fairly decent relationship with the Georgia Southern Community. We have a banquet hall right behind the building, and they do a lot of events, semi formals, meetings, luncheons. I wouldn’t say we have a lot of students come in here and actually eat; at night time for date nights and what not we see a lot more students,” Samantha Thompson, general manager, said.

Son’s Döner Kebab- “These [types of food] are all over universities [in Europe]. So being this close to the University is a natural sort of thing. A lot of our main clientele at first, because we didn’t advertise it much, have been students who’ve studied abroad in Germany, France and the United Kingdom and then professors who have been abroad to Europe, because they’ve all had this stuff, and they all love it,” Son Nguyen, owner, said. Translated by employee Carson Downs.

El Rinconcito- “We help [the Spanish department] out, and that brings more people in here, more new students to learn about the place and eventually brings more new people in here other than our regular customers… [La Mesa de Conversación] is for students that want to learn Spanish or are taking classes, they come here and we talk to them in Spanish and we’re not allowed to talk to them in English,” Maria Arteaga, waitress, said.

Southern Boy’s BBQ- “I’m a huge supporter of Southern, the better Southern does, the better I do. As it grows, I’ll continue to grow. It’s super important that I continue to make all these connections I have with students, student organizations, professors, administrators and sports teams I’ve catered for so that they continue to spread the word about how good the food is, and how open we are to being a part of what they are doing. I want to have a Georgia Southern themed restaurant. It takes sometime for people to adopt you, and for people to figure out we’re gonna be here for the long haul, and this isn’t an open up and close down in six months type of spot, we’re gonna be here a long time,” Stephen Maenpaa, owner, said.

Could you give us some background info on your restaurant, where did the inspiration for the theme come from, etcetera?

Son’s- “In Germany, these things are always sold on the street, this is street food, people buy these…often on the way home from work, on the way home from a long night out and so it’s cheap food…it’s not really expensive. You see the youth eat it a lot, you see everyone eat it alot, but you know, it strikes a special chord with students,” Nguyen said.

40 East- The owner wanted to go after a Savannah-like clientele and atmosphere but he wanted it to be in Statesboro. He wanted a modern yet antique feel to it, all while having it be a very comfortable spot. So you come in, feel a little upscale but at the same time like you belong.

El Rinconcito- “It started as a little place, and it’s been expanding ever since as it has been getting popular… Compared to El Som or any other place this is the closest to Mexican food that you can find here. In Mexico, they have a stores with little restaurants next to them, it brings more people into the place. It’s the authentic way,” Maria said.

Southern Boy’s- “I moved back to Statesboro after working at various restaurants and traveling. [Once back here], I aided Heath Robinson, (the former GM of the Holiday Inn) in opening the New York City Pizzeria. We came up with the name pretty quickly. Southern Boys, we’re in Statesboro, Georgia Southern Grad, so most of it came pretty painless,” Maenpaa said.

What kind of Restaurant do you see as?

Son’s – “The food itself is what’s known as Turkish German. Döner Kebab is technically a Turkish origin dish, but the way it’s presented here and the way we package it is the way it was invented in Berlin to sell to German people. So it’s a Turkish food made by Turkish immigrants to Germany,” Nguyen said.

40 East- “At lunch we do your normal soup, salad and sandwich. At night time we do all things like ribeyes, to scallops, to fresh cut salmon. We have a shepherd’s pie on our menu made with elk meat, which is amazing! They come up with all of that on their own. Our seafood is flown in three times a week, all fresh off the dock,” Thompson said.

Southern Boy’s BBQ- “Other BBQ restaurants do different kind of food businesses, I do a lot of pulled pork business. I think our specialties are different; I would say mine is definitely more college orientated. We do wedding receptions, rehearsal dinners, fraternity and sorority events, small luncheons, anything anybody needs catered and they want BBQ,” Maenpaa said.