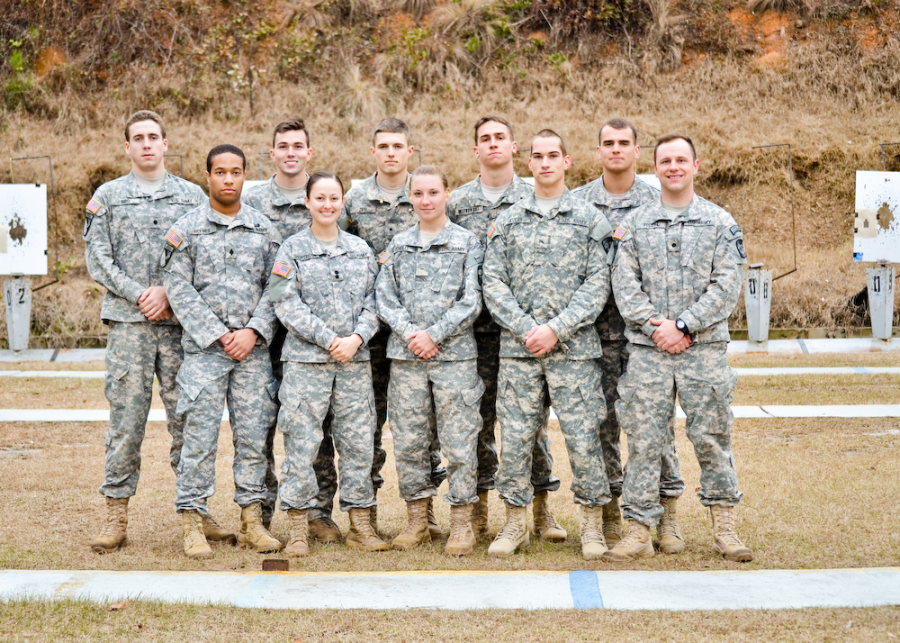 It’s January. It’s chilly and miserable outside. While most students at Georgia Southern are struggling to make it out of their beds for their noon classes, the GSU ROTC Ranger Challenge Team is up before 0600, running four to five miles, carrying twenty to thirty-pound rucksacks on their backs. They aren’t doing this for fun, though; all of this hard work is in preparation for the upcoming Ranger Challenge Competition.

Since September, these men and women have been training for the two-day competition. Thirty-five people originally tried out for the team, but since September, that number has been narrowed down to nine (along with two alternates). During the competition, the Ranger Challenge Team will compete in events such as shooting and grenade exercises, long-distance runs, land navigation exercises and even injury and casualty simulations.

Charlie Witkowski, MSG 4 and Captain of the Ranger Challenge Team, agreed with his teammate.

“We have changed our mentality some. We used to just want the biggest guys, but now we’ve realized it’s a running man’s game and a thinking game. You have to think about it, do it the smart way and do it the fast way,” Witkowski said.

This will not be the first time that Georgia Southern’s ROTC has competed in the Ranger Challenge; the team has been a presence at the competition for many years, under the coaching of Sgt. 1st Class Linn, but never placed higher than eighth or ninth.

In 2012, Linn began to push the team harder, Fischl said, taking them on long runs where they were required to carry at least fifty pounds of added weight. Early in 2013, Master Sgt. Timothy Parks began coaching the team with Linn.

In 2013, the team won fastest overall time and the overall competition, beating teams from schools such as Georgia Tech, UGA and FSU.

“We showed up and were competing against over 40 different schools. It was a little intimidating, but we just gave it our best. We got fastest overall time. And then when they came to top three, we were number one. We still have video of them calling our names—we just couldn’t believe it,” Witkowski said.

Following the unexpected win in 2013, Witkowski said that they got much more serious about the competition. MSG Parks took the reins, becoming the team’s sole coach. His goal was to make sure that the team did not return to the competition simply to compete; instead, his goal was for them to win again.

In 2014, the team finished in 2nd place overall, finishing just behind their rivals at Florida State University, which has given them extra motivation for this year.

“We won first in rope-bridge, road march and overall time, but not first overall,” Witkowski said. “This year, we’re determined to win and defeat FSU. We’ve trained like no other.”

MSG Parks, the team’s coach, adamantly stressed how hard these men and women have trained throughout the past few months.

“Imagine waking up every morning at 0500 in the pitch dark, below freezing and putting on a heavily-weighted ruck sack and running for miles on end. Pushing your body till there is nothing left. Imagine sacrificing your weekends to train on weapon marksmanship and other tedious tasks that might give you an upper edge in the competition. These Cadets—college students, might I add–have poured their heart and soul into preparation for this event,” Parks said.

The team leaves today to compete in the Ranger Challenge Team at Camp Blanding, Fla.