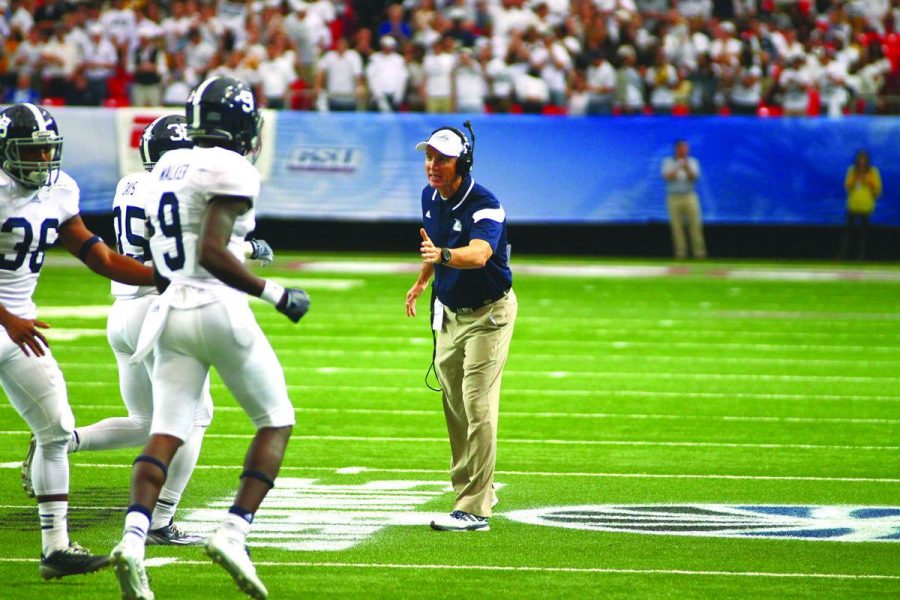 Year one has come and gone since Georgia Southern head football coach Willie Fritz was hired to replace Jeff Monken, and what a year it was.

The 2014 football season saw the Eagles go toe-to-toe with two formidable ACC programs and finish the season with an unblemished Sun Belt record along with an outright conference title.

“It’s been a lot of work. The biggest challenge for me was coming to a new area of the country,” Fritz said. “When you take a job, you forget about learning about the university itself and the community. Everybody knows me as coach. They might not know my name, but they can call me coach. I’m trying to meet everyone and it’s just been a lot of new experiences for me.”

One challenge Fritz had to deal with in the transition was piecing together a staff for his newfound program. A good coaching staff can make the life of a head coach much easier and that is just what happened at Georgia Southern in 2014.

“It’s one of the few things I’ll brag about. I think I did a great job of putting together a really good staff,” Fritz said. “They’re easy to work with. Unfortunately, in this profession, the higher up you go, the more egos you’ve got to deal with, particularly with coaches and sometimes administration. We don’t have that here. There are just not a lot of egos here at Georgia Southern.”

For Fritz, who was hired from Sam Houston State, an FCS program, another major factor which separates FBS and FCS football is recruiting.

“I had very little recruiting background in the state of Georgia, a little bit in Florida, zero in South Carolina and zero in Alabama,” Fritz said. “Recruiting FCS, you really don’t get into the meat of recruiting until December and January, and you sign them in February. Now, it’s year round. You’re doing something with social media, writing letters, phone calls, visiting, meeting and watching video daily. It really is 365 days a year.”

A huge recruiting tool, ironically, became the losses to NC State and Georgia Tech. Both teams played in bowl games this season, with Georgia Tech defeating Mississippi State in the FedEx Orange Bowl. Georgia Southern was two plays and five points away from defeating both ACC programs.

“You know, it’s probably the first time in my career that I’ve ever thought we gained anything from a loss,” Fritz said. “I was dejected and disappointed that we didn’t win those games, but the exposure that we got on television helped us in that respect.”

Looking forward for Fritz and the Eagles, National Signing Day is less than a month away, and he will continue his year-round job of recruiting. Last season made a statement, but it’s now in the past, and the only focus for his program is the 2015 season on the horizon.