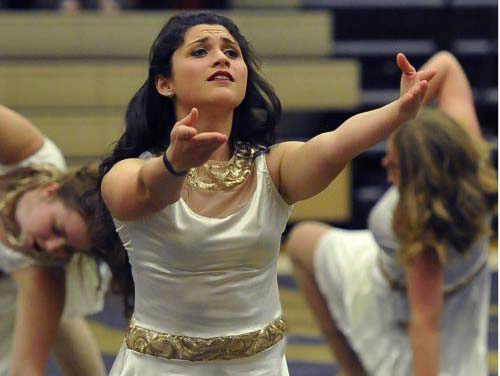 For only the second year, Georgia Southern’s winterguard team is undergoing long practices to learn the dance steps needed to perform a themed routine for the upcoming season.

Unlike colorguard in the fall, winterguard puts more focus on complex dance routines and interesting themes incorporated within the music. This season’s theme revolves around the idea of letters being sent back home during a time of war. The story is set to the song “Crystalline” and participating members already feel very enthusiastic.

“The great thing about winterguard is that you get to express yourself a lot more than fall colorguard. You get to tell a story,” Wyndi Kappes, colorguard co-captain, said.

Performing within the Southern Association for Performance Arts (SAPA) circuit, GSU winterguard students are teaming up with Jose Morales for rifle and dance routine assistance and choreographer Kristen Martin in the hopes of having their best season yet.

“I’m really excited for the show we are producing. We have a lot of great talent this year and the members have already put in a lot of practice time,” Martin said. “I expect this show to do really well in our competition circuit this year and present GSU as a major competitor for the future.”

With the season lasting from December to April, winterguard offers increased opportunities for practice and performance. The team this year consists of more experienced spinners that attend five-hour practices every Sunday as well as various camp sessions.

“The intensity of the season really pushes you to your limits and betters you as a performer,” Ebony Turner, winterguard member, said.

Formal auditions are over but GSU’s winterguard is still accepting new participants. Kristen Martin can be reached at kmartin6199@gmail.com for students interested in joining. The members urge fellow Eagles to keep a lookout for anticipated performance dates as well as future fundraisers and percentage nights.