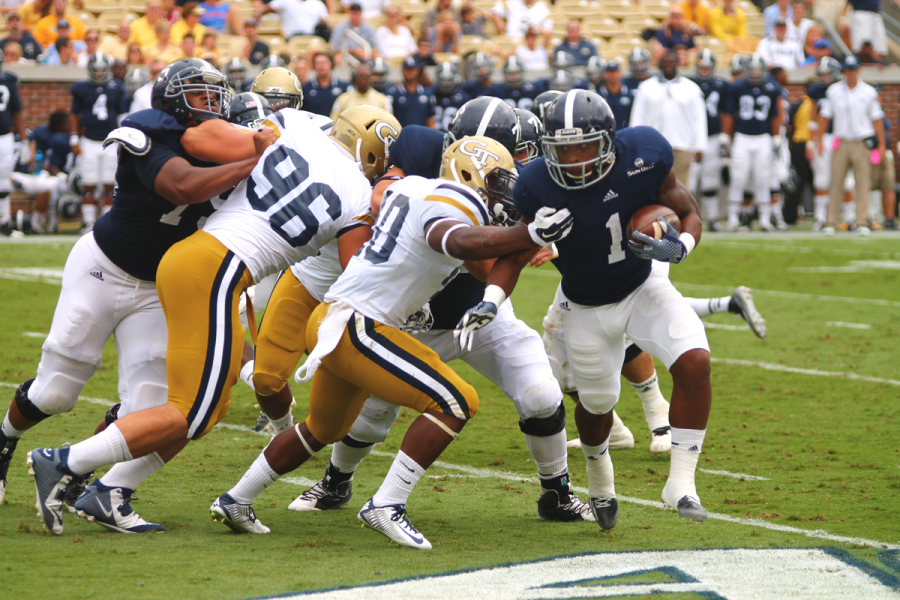 On Tuesday it was discovered the NCAA denied the appeal by Tom Klenlien to allow the Georgia Southern football team to play in a bowl game this season. Nonetheless, the Eagles have given us more entertainment and surprises than we could have imagined.

After the spring game, fans weren’t sure of what to expect. Former head coach Jeff Monken was out and Willie Fritz from Sam Houston State took the reins. We saw a mix of the old offense and the new. Over the summer, six players were kicked off team and everyone was waiting with baited breath as the Eagles were ranked eighth in the Sun Belt conference to start the year.

When they traveled up to N.C. State most fans were hoping for the Eagles to just be able to slide through the game and come home to Paulson. What they got was a nail biter in which senior linebacker Edwin Jackson and the defense slowed down the passing attack of one of the best quarterbacks in the country. We also got our first taste of watching sophomore running back Matt Brieda pick up speed an grab a 60+ yard touchdown run. Despite the valiant effort they still took home a one-point loss, but showed they were capable of something special.

After a beat down at home against Savannah State where the Eagles racked up 83 points, they were on the road again to take on Georgia Tech. After another breakaway run by Brieda the team went into the half down by ten points. After a heroic comeback led by sophomore quarterback Kevin Ellison and his backup Favian Upshaw the Eagles fell to Georgia Tech by one score. It is important to note that after defeating the University of Georgia last weekend the Yellowjackets are ranked 16th in the country and will take on Florida State for the ACC Championship this weekend.

Most teams would be worried about a 1-2 record to start the year, but there was a buzz in Statesboro. The Eagles traveled to South Alabama and impressed in their first Sun Belt performance with a 28-6 win to put themselves on the map. After the impressive display the team was gritting their teeth to get a shot at Appalachian State at home after losing to their rival two years in a row.

The rivalry matchup ended up looking like a Georgia Southern highlight reel. Over 25,000 fans packed into Paulson to watch the game that was being broadcasted nationally on ESPNU. Brieda took a 56 yard run to the house on the first drive to set up two touchdowns from the second half of the deadly running tandem in redshirt freshman L.A. Ramsby. The 34-14 victory gave the Eagles a winning record and they never looked back.

Sun Belt contenders trembled as they faced off against the number one rushing attack in the country. Georgia Southern dropped five straight conference opponents that included a 69-31 route of Georgia State and a 42-10 beat down of Troy on ESPNU. Following a close victory against Texas State the Associated Press gave the Eagles a vote in consideration for the FBS Top 25 programs.

The Eagles hit a road bump when they traveled to Annapolis, Maryland to take on the Navy Midshipmen. Things got ugly quick as the Eagles got a taste of their own medicine against the triple option. When the clock hit zero the Midshipmen were able to claim the victory, 52-19. While the chance of being ranked was gone, the Eagles got the chance to be outright Sun Belt Champions after Appalachian State took down conference undefeated opponent Louisiana-Lafayette.

That brought us to last Saturday against ULM. In the perfect comparison to the rest of the season, we saw the Eagles fight with heart to take back a lead late. Ellison sacrificed his body on his heroic drive to score on a six minute drive. After going stepping in to take the reins senior quarterback Ezayi Youyoute lead the team from behind to claim a victory and the Sun Belt conference championship.

The season may be over, but these Eagles will go down in history as one of the best teams to play in Paulson Stadium and we are all here to witness it.