Students march in response to Ferguson 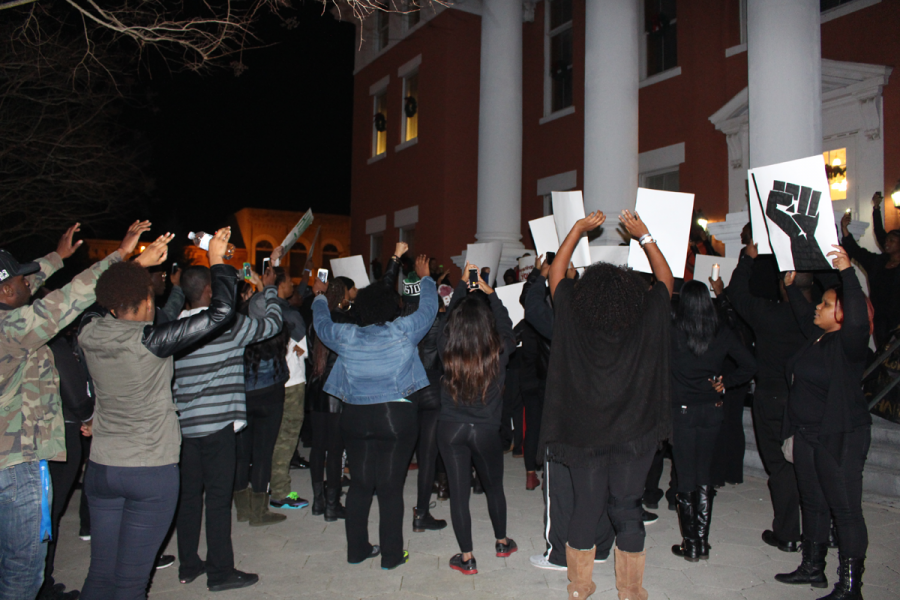 Students gathered in the Rotunda Monday night, faces lit by candles meant to remember a young life lost in a small town in Missouri and to also shed light on the power of voices in the Georgia Southern community.

At least a hundred Statesboro students gathered on Georgia Southern’s campus Monday night to march in honor of the life of Michael Brown, the unarmed 18-year-old who was shot and killed by a police officer in Ferguson, Mo. this past August.

The March on Statesboro, as the event was billed on social media, encouraged students and community members to bring candles and come dressed in black.

“It is for Mike Brown, but it’s also not about him,” Ashley Mattison, senior multimedia communication major, said. “It’s about an opportunity for people to come together to inspire other people and know there is a community here at Georgia Southern that cares about people who feel like their voices aren’t heard.”

The group marched from the Rotunda on campus to the Statesboro courthouse, where demonstrators sang “Lift Every Voice and Sing.” Speeches were preceded by several students performing original poems about police brutality.

“I think that the most important thing concerning the march tonight is that we teach students from SOAR that your voice is important and that you are responsible for how you use your voice,” Dean of Students Patrice Jackson said. “I am very proud of the students who will participate tonight in using their voice in a responsible way and anything that we can do to support this effort we will.”

Following the decision of the grand jury not to indict Darren Wilson, the officer who killed Brown, on any charges, protests have erupted all over the country.

Events remained peaceful, and James “Major” Woodall, one of the speakers and organizers, led the crowd in a round of applause for the Statesboro Police Department officers who escorted the demonstrators.