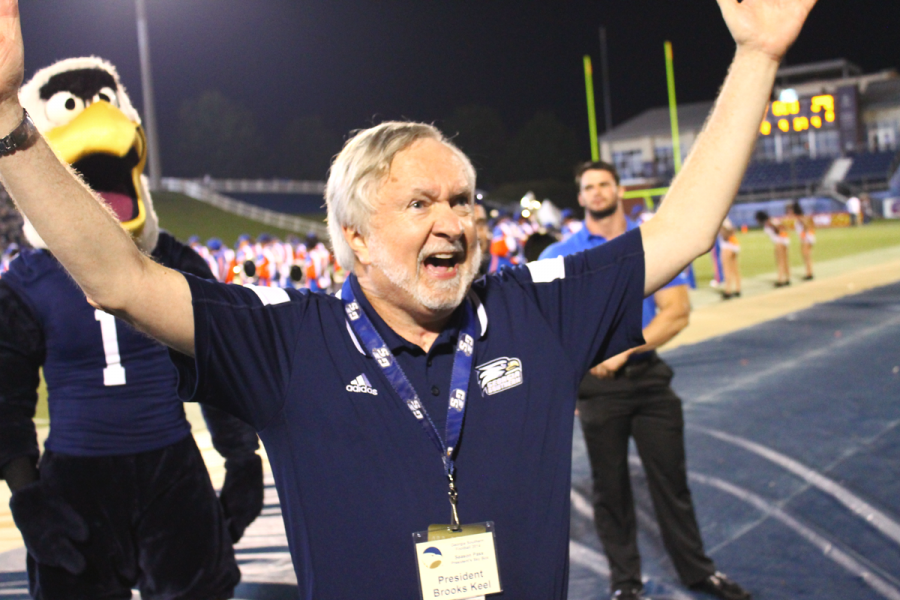 When the NCAA created the rule which states that teams in the second year of FBS transition will not be eligible for bowl consideration, teams like the 2014 Georgia Southern Eagles were probably not thought of.

With the Eagles boasting an 8-2 overall record along with an unblemished Sun Belt record, Georgia Southern would be an obvious choice for many bowl games once the postseason rolls around. Couple that with GSU student Jeremy Mack’s #freeGSU petition, which currently has over 5,800 signatures, the rule in question may be ripe for debate.

“I’m incredibly proud of what we’ve done. We’ve got tremendous national attention from this in a very good way,” said Brooks Keel, Georgia Southern President. “I think that if we continue to win, this conversation is going to get much louder and I will be one of the main people out front pushing it.”

Keel is currently in New Orleans for the Sun Belt Presidents Meeting. He says talks of change would have to begin with Sun Belt Commissioner Karl Benson.

“He’s [Benson] very optimistic that if we continue to be successful there might be an opportunity for us to make some changes and we would start working with him. His job is to interpret what we can and can’t do as a university and as a conference,” Keel said.

The amendment of this rule, whenever that day may come, will have major ramifications on the landscape of college football.

Keel said, “You know, the Sun Belt stands to gain as much notoriety as we do, as well as future conferences down the road for FCS teams that make it to this point. It says an awful lot about our program, our coach and our team that we’re even having this conversation.”