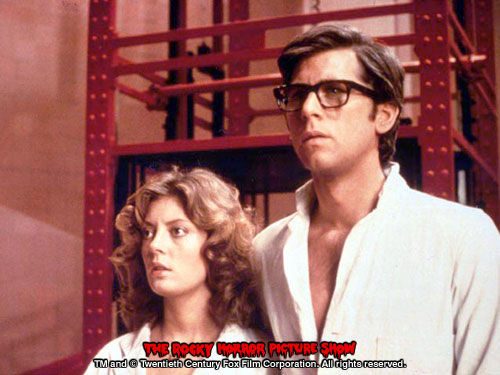 It was Wednesday night, and there I was onstage in front of both strangers and friends alike with my middle finger up to the spotlight as I took the virgin pledge. My heart was racing, partly from dancing and partly from the fact that I was only wearing a blazer, bra, underwear and little much else.

My fellow virgins of the “Rocky Horror Picture Show” also stood with their middle fingers up as we, together, pledged to lose all of our morals and accept decadence into our hearts.

How did I end up in this situation? It had only been a few days prior that my friend and partner-in-crime Vanessa Peterman asked if I’d be interested in being a dancing trixie for the show. She was to play the lead role Janet and, because the show had come dangerously close to being canceled, the directors were seeking out last minute dancers to be added to the cast. Despite the fact that we’d only have three days to rehearse and I had never seen the show before, I enthusiastically said yes.

I was happy to find that the cast and crew of the show were both friendly and welcoming. Since the show required us to bump and grind one another, there was no time to be awkward or shy. Rehearsals for the trixies, trannies and mannies involved us dancing on each other as sexually as possible in the lobby of the Averitt Center. Several times unsuspecting pedestrians walked past the tinted glass doors to get a glimpse of what must have been an interesting scene, however, we kept dancing regardless.

To say I was nervous the day of the show would be an understatement. There were a couple of times I had to be on stage, and the fact that I’d have to make my debut performance pantsless made me want to chicken out. Luckily, the pre-show was all about dancing and playing games so I got to interact with the audience members first.

The audience was fantastic. The attendees ranged from about age 18 to 81, and many of them had seen the show dozens of times before. They blew up the condoms we gave out and bounced them around the room to each other like balloons, yelled out hilarious jokes during the play and rooted for the brave virgins willing to play the crazy games we had set up.

Overall, I’ve come to realize that the “Rocky Horror Picture Show” isn’t just about sex, glam and rock-and-roll. It’s largely about acceptance–the acceptance of others and of ourselves, no matter how different or weird we are. Though I’ll never be a “Rocky” virgin again, I’ll always remember my first time.