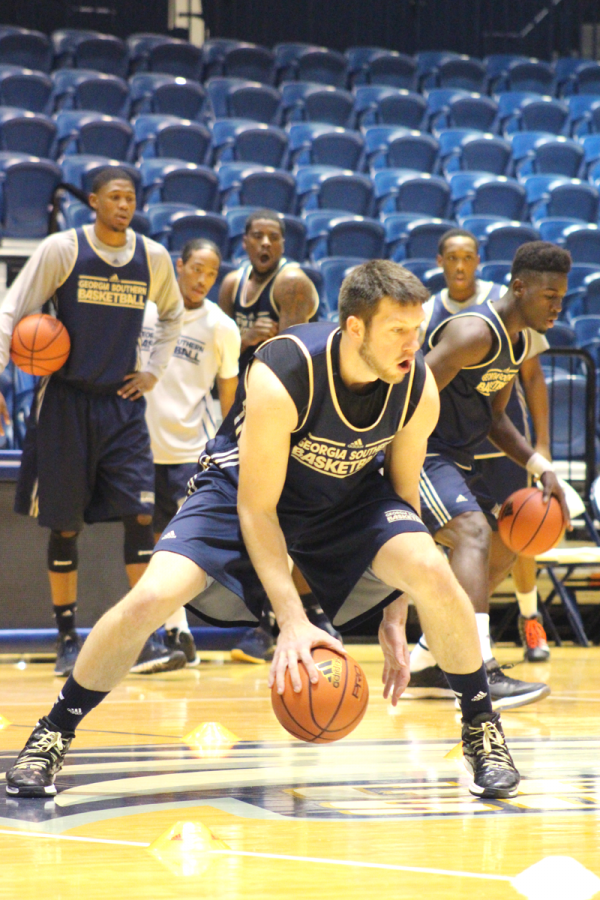 Last year’s playoff run for Georgia Southern men’s basketball has left the team and fans alike hopeful for the 2014-2015 season. After visiting the second round of the playoffs in the Southern Conference last season, Georgia Southern must now shift its focus to new competition in a new conference – The Sun Belt.

“What we know about the league is it’s more athletic. It’s a better basketball conference,” Head Coach Mark Byington said. “We better have a good team if we’re going to compete in this league. But I’m excited about the guys that I’m taking into our first year in the Sun Belt.”

The players seem to share the same point of view as Coach Byington when it comes to the new conference. They are displaying confidence in their ability to compete at an elevated level and are actually excited to face these new teams.

Taking it one game at a time is what you expect from any athlete. But something else that ensures success is hard work, and that has always been something that the men’s basketball team has taken pride in. They practice hard, and play at a level that some teams can’t keep up with. If their most recent practices are any sort of indication of the hard work they have been putting forth for the upcoming season, then the Eagle Nation should be in for a treat.

One player that knows exactly what hard work is would be sophomore forward Kyle Doyle. As a freshman last season, Doyle saw significant playing time and was able to get some much needed experience. In his mind, Georgia Southern should have a pretty successful season.

“I wouldn’t be surprised if we finish in the top three. We’ve put a lot of work in. Everybody’s been working real hard. And with our leaders leading us, I don’t see us not going far,” Doyle said.

The Eagle’s come back this season after losing only one key player in Tré Bussey. Bussey was the second leading scorer on the team last season. Two other notable players that have also graduated are Brian Holmes and Marvin Baynham. Although this may be a significant loss for some teams, it doesn’t seem to faze the Eagles. Hewitt says that the loss of Bussey won’t affect the team too much at all.

“Obviously Tre was huge for us, bringing in 16 points a game. But we’ve got guys coming back like Eric Ferguson and Trent Wiedeman. And we’ve got our younger guys too. So those guys are gonna step up their game and we’ll be alright.”

But with any new season comes adjustments. Graduated players have to be replaced and new schemes must be created. If you had asked Coach Byington his starting lineup around this time last season, he would have been able to answer you without hesitation. But this season looks a little different. This season brings something new for the coaching staff, and for the players as well.

“We’re still establishing roles. Guys are still competing. And I like the fact that I’m having trouble figuring out who’s gonna play,” Byington said. “I still have some young guys getting better and improving. They’re pushing some older guys and they’re going to make big impacts.”

Although the starting lineup may not be set, the expectations for this season are in place. After last year’s performance, the team is expecting success even in the midst of high caliber teams that they haven’t seen before.

And surprising the Sun Belt is exactly what the Eagles plan to do. Picked ninth in the preseason poll, Georgia Southern has a long way to go to reach the No. 1 spot. A new face on the court that we are sure to see will be redshirt senior forward Trent Wiedeman. After transferring from the College of Charleston and sitting out last season due to NCAA transfer rules, Wiedeman’s presence will not go unnoticed. He will surely help the team climb the Sun Belt rankings, but Wiedeman doesn’t pay too much attention to those rankings this early in the season.

“Preseason polls don’t really mean anything to me. They’ve never determined anything,” Wiedeman said. “There’s a lot of question marks about us so I kind of expected us to be towards the bottom. But I think we’re going to use that as motivation. We’re a lot better of a team than the bottom of the league, we know that. So we’re going to play like it.”

Wiedeman also knows what the coaches and fans expect from the team. And that’s an attitude of tenacity and excitement on the court and from the bench.

That quick offense will be something Eagle Nation caught a glimpse of last season, but may see more of this year. Athleticism on the court is key to any basketball game and Coach Byington believes he has found that with the team he has this season. But as a coach, that’s not all he is concerned about.

“We are much more athletic than we were last year. So I’m excited about that part of it. But at the same time a lot of basketball comes down to executing, playing the right way and being in the right spot. Athleticism can take you so far but executing is going to take you further.”