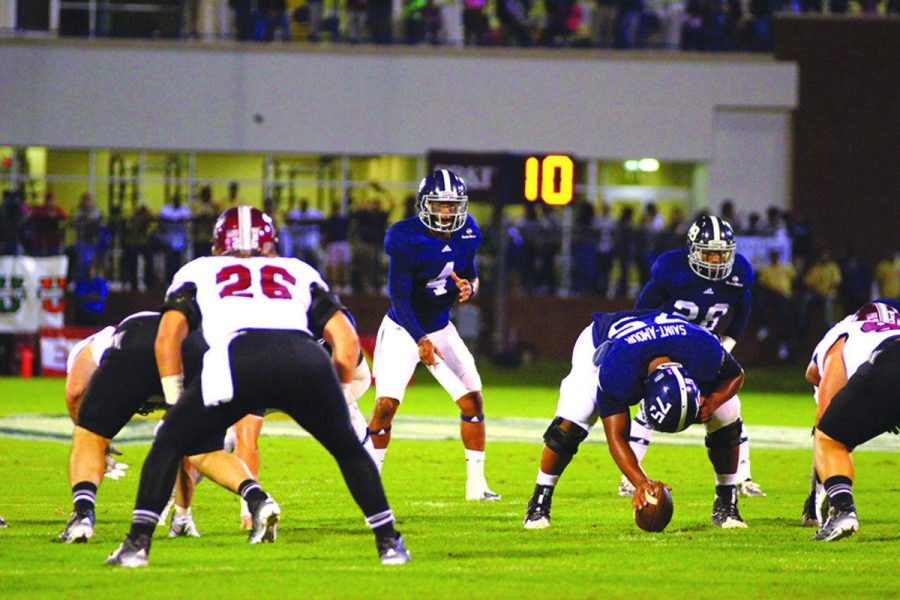 With Texas State fighting for bowl eligibility and Georgia Southern trying to break into the top 25 and retain their spot at number one in the Sun Belt. After one of the most intense back and forth of the season the Eagles were able to hold on for a victory, 28-25.

Neither team could move the ball on their first possession. That was quickly corrected by sophomore quarterback Kevin Ellison taking a 31 yard run to set the Eagles up for their first touchdown of the game. The Eagles took back possession before the end of the first quarter but were unable to move the ball.

On their fourth drive of the night the Bobcats were able to take advantage of good field position and put up a field goal, 7-3 Eagles. Redshirt freshman running back L.A. Ramsby scampered into the endzone for the Eagles on the next drive to reaffirm their lead. The rest of the second quarter featured both offenses struggling to move the ball down field and the half ended 14-3 Eagles.

The third quarter offered excitement for the fans of both teams. Georgia Southern started the half with the ball, but less than a minute later the Bobcats were back in control. After being quiet for the first half sophomore running back Matt Brieda broke a 43 yard touchdown run to extend the Eagle lead.

Texas State worked their way down the field and scored their first touchdown of the night. The Eagles had no answer and on the ensuing Bobcat possession they worked the ball all the way to the goal line. On a gutsy fourth down and one from the goal line junior safety Matt Dobson intercepted a pass into the endzone and took it 105 yards to the house, 28-10.

With little time left Texas State pulled away chunks of yards and had the Georgia Southern defense on their heels. A first down pass brought the Bobcats into the redzone with 1:23 left and down by 11 points. A pass interference penalty brought the Bobcats to the ten yard line which was followed by a toss into the endzone. The two point conversion brought the score to 28-25 with over a minute to play.

The onside kick by Texas State was recovered by the Eagles. Texas State still had two time outs and over a minute left to play but a fumble on their first play nearly reenacted the two earlier losses this season.