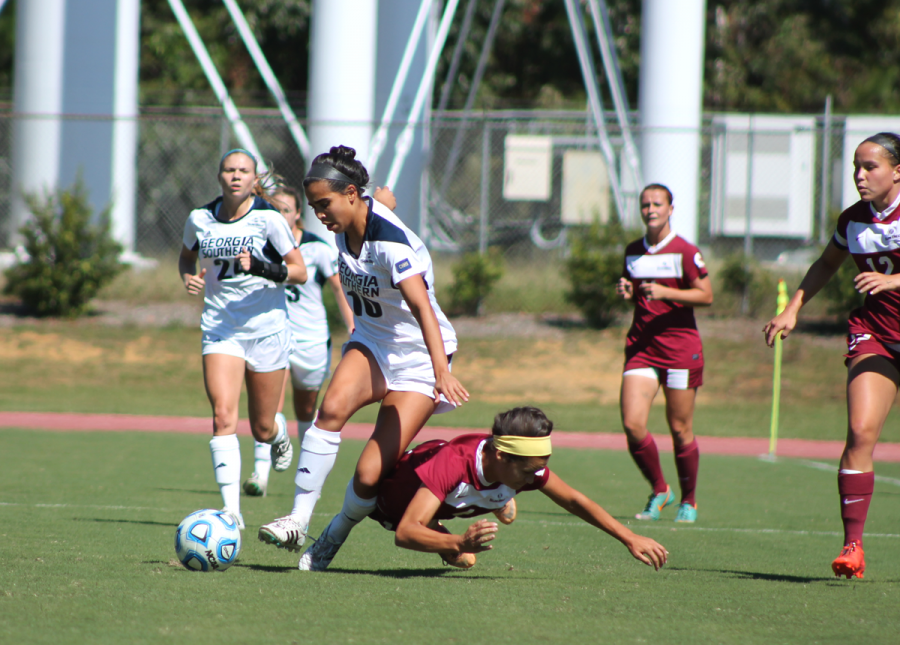 Sunday was a disappointing afternoon for the Georgia Southern Women’s Soccer team (9-3-1, 4-1-0). The Eagles gave up their first match in league play, and ultimately dropped to second place in the Sun Belt Conference standings where they are now tied with Texas State.

The Jaguars’ and Eagles’ play styles are very different, so it will be interesting to see the outcome of this game and whether the Eagles are able to bounce back after a rivalry game loss against Georgia State.

The Jaguars will definitely be looking to use their attacking nature to get past the Eagles in this match. They lead the conference in shots, points and goals. They have outshot opponents 349-141, and have nearly tripled the amount of goals scored versus goals allowed.

That being said, the Eagles’ redshirt senior goalkeeper Katie Merson will have her work cut out for her. She faces an average of 12.4 shots per game, yet the Jaguars have a shots per game of 23.3 scoring on 3.53 of those.

That’s not to say that it’s an impossible task to stop this type of power. Merson is ranked seventh in the conference for saves with a total of 16, so she is completely capable of facing a team like the Jaguars.

Something that may play to the Eagles’ advantage is South Alabama’s tendency to foul. They have five yellow cards on the season. This will give the Eagles the opportunity to score off of set pieces.

The Eagles’ defense will have to step up and play nearly perfect and the offense must keep play a fast-paced match in order to compete with the Jaguars. Last week was a performance that Georgia Southern wants to put behind them, but it won’t be an easy task if changes aren’t made for this upcoming match in Mobile.

The Jaguars offense is tenacious, which is obvious from the amount of shots they have recorded.

However, the Eagles are an organized, well-coached and poised team that has a number of solid athletes who can score and will come out with a vengeance after losing last weekend. Watch for them to pass the ball around in order to get the ball in the net; the Eagles rank first in the conference in assists.

Whoever comes out with a win here is guaranteed first place in the conference.

Winning this match is exactly what Georgia Southern needs to gain back their confidence with just two weeks left in league play. ZThey head to Troy, Ala. to take on the seventh ranked Trojans on Sunday.