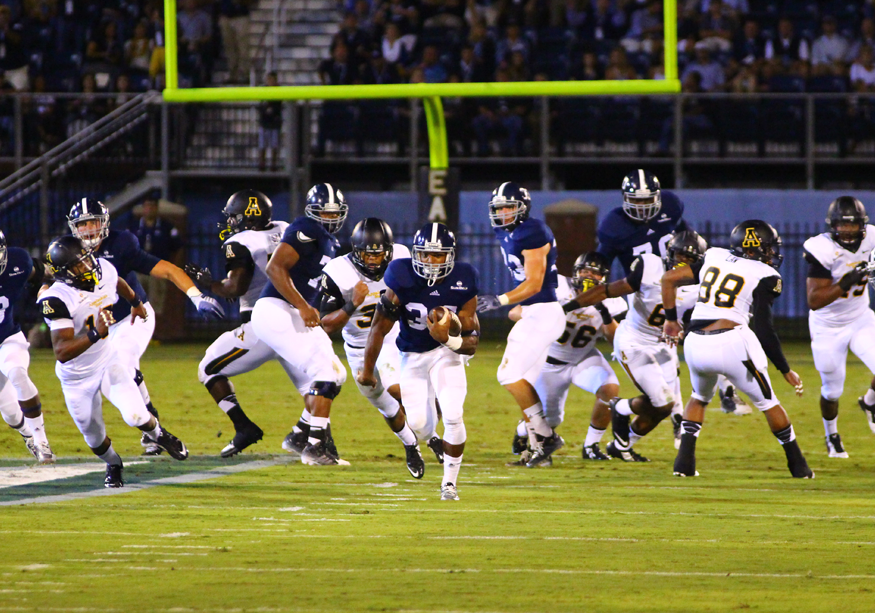 Sophomore running back Matt Breida (36) has run for 676 yards and eight touchdowns on the season. Breida and the Eagles take on Idaho on Saturday at 6 p.m. in Paulson Stadium.

Homecoming is here and the Georgia Southern football team will have an opportunity to grab its fourth Sun Belt win over the underdog Idaho Vandals (0-5, Sun Belt 0-3) team and defend their spot on top of the conference.

The Vandals dodged a bullet early when their first game against the University of Florida was cancelled. Their three conference losses came from Louisiana Monroe, South Alabama and last week against Texas State. The Eagles took on South Alabama two weeks ago and won 28-6, in contrast the Vandals, who fell 34-10 to the Jaguars.

While they may not have won a game, their passing attack is one of the best in the conference. Redshirt freshman Matt Linehan has taken every snap for the Vandals and leads the Sun Belt in passing. Lienhan has a 61.2 completion percentage with 1,644 yards and nine touchdowns. However, along with the nine touchdowns he has thrown away 10 interceptions and has not moved well in the pocket with -96 yards rushing.

Idaho’s passing attack has proven to be diverse as well as efficient. Four different receivers have over twenty catches and total for over 1,200 yards. Senior receiver Joshua McCain has been Linehan’s target receiver with 37 catches, 568 yards and six touchdowns. McCain averages 15.4 yards per catch and when this is paired with sophomore Richard Mongomery with 10.6 yards per catch the Eagles could be picked apart by the mid-range passing attack.

Junior Vandal linebacker Marc Millan is the heart of the defense and will have his hands full defending against the Georgia Southern rushing attack. Millan has 43 total tackles on the season including four tackles for loss and two forced fumbles. The defense has been the Achilles heel for the Vandals all season and they will be expected to have trouble defending the spread-option this Saturday.

How the Eagles stack up

The Eagle offense remains the leader in nearly every category in the Sun Belt, excluding passing categories, including the number one spot in the FBS for rushing. Sophomore running back Matt Brieda and quarterback Kevin Ellison are ranked number one and two in the conference in rushing, respectively. With the Idaho defense allowing over 250 rushing yards per game the Eagles have a chance to grind the ball on the ground without the need to throw the ball.

Last week the Eagles gave up two quick touchdowns against New Mexico State largely through the mid-range passing game. This week they will be facing a more efficient passing attack on a team that does know how to score. Sophomore defensive end Jay Ellison and junior linebacker Antwione Williams will be key in keeping the young quarterback at bay. Senior safety Deion Stanley has a chance to add to his three interceptions on the year as Linehan is averaging two picks per game.

The Eagles will be sporting new traditions jerseys for the homecoming match-up, which is set to kick off in Paulson Stadium this Saturday at 6 p.m.