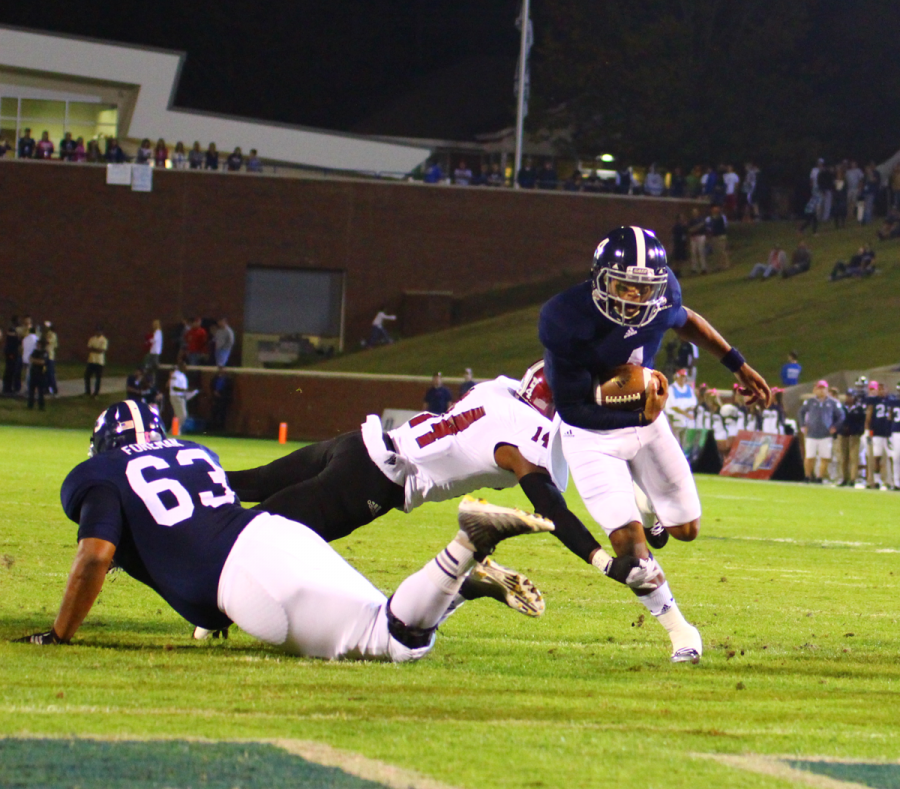 After a beat down of Georgia State last weekend the Georgia Southern football was ready to put away another opponent to keep their top spot in the conference. The Eagles were able to assert their dominance over the Trojans and come away with a win, 42-10.

Things had an exciting start as the Troy returner had the ball stripped from his hands on the opening kickoff, giving the Eagles the ball on the Trojan 15 yard line. Three plays later sophomore quarterback ran through the middle of the defense for a touchdown. After forcing Troy to a three and out the Eagles ate up nearly the entire first quarter on a 15-play 7:25 long drive that ended in Ellison running in his second touchdown of the night.

Late in the first quarter sophomore running back Matt Brieda lost control of the ball and gave Troy the ball in Eagle territory. After being stalled on the ten yard line the Trojans settled with a field goal, 14-3 Eagles. After taking a brutal hit Ellison called to be replaced. Sophomore quarterback Favian Upshaw came in to the game and broke two twenty yard runs setting up a four yard touchdown run by redshirt freshman running back L.A. Ramsby.

With time winding down in the first half the Eagles appeared that they were going to go up by four scores. Inside the twenty yard line Ellison attempted to pitch out on an option play but it was bobbled and Troy came up with ball but ran out the clock to end the half, 21-3 Eagles.

To open the second half the Eagles were able to march down the field and score on a goal line dive by Ellison for the third time. The game when back and forth for the rest of the third quarter and the Eagles headed into the fourth with a 28-3 lead.

The fourth quarter began with Ellison turning a broken play into a 30 yard run which set up Ramsby’s second touchdown of the night. After failing to do anything again on offense, Troy gave up the ball to the Eagles. Upshaw checked back into the game and helped lead the team downfield and score on a 19 yard run to make the score 42-3.  Troy was able to answer back by driving down and scoring their first touchdown of the night. Senior quarterback Ezayi Youyoute and senior running back Dennis Pritchard helped the Eagles run out the clock, ending the game 42-10.