Eagles record first win at home, followed by another loss 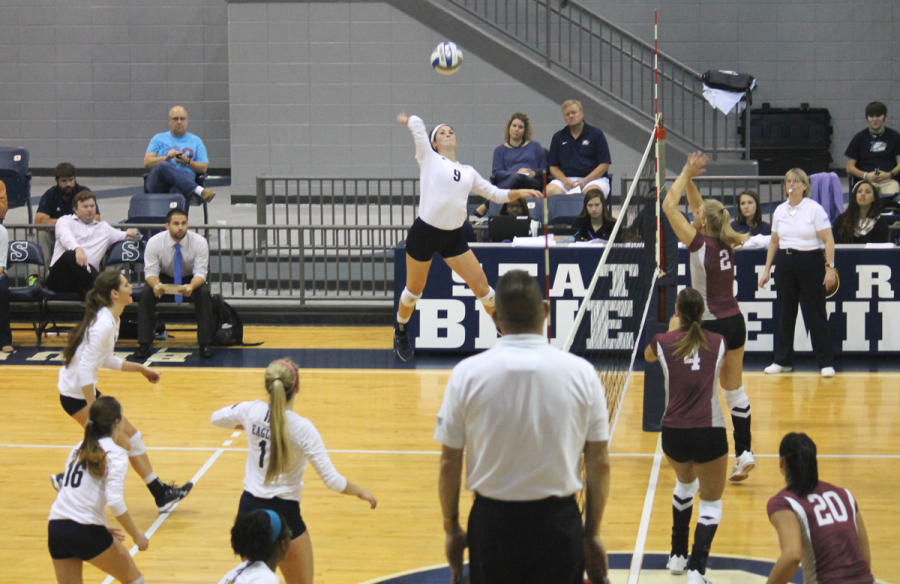 Senior outside hitter Jamie DeRatt (9) recorded 30 kills over a weekend that saw the Eagles go 1-1 in conference play.

The Georgia Southern Eagles came back to Statesboro this weekend for two conference matchups against Troy and UALR. While they started the weekend off strong with a 3-0 shutout over Troy, they couldn’t keep the momentum going. The team ended up losing three straight sets to record their fourteenth loss of the season.

Coming into this match, it was hard not to wonder if the Eagles were going to let their loss to Troy earlier in the season affect their play, but with the constant shutdown of the Trojans, it was clear that the Eagles weren’t going to make the same mistakes. The Eagles were led by redshirt freshman, Megan Chevalier, who recorded sixteen kills. The match wasn’t even a close affair until the third set, where GSU only won by two points. That third set win was cemented with some late kills from Jamie DeRatt and Catherine Murray. This win over Troy was the first home victory for the Eagles all season. Kat Minnerly, as usual, led the team in assists with 43.

With all odds against them in this match, the Eagles started off with a win in the first set, but the rest of the match ended up being heartbreaking. However, it was clear that the Eagles were not going to go down without a fight. In fact, the biggest win UALR had was by only six points. In the third set, the Eagles came back from four straight set points, but UALR proved to be too much, as they eventually lost that set 28-26. Seasoned seniors Jamie DeRatt and Kym Coley led the team in kills with double digit numbers. The stat sheet truly doesn’t show how close this match was, as UALR ended up doubling the Eagle hitting percentage with 20.8% compared to the Eagles 10.4%. This win over the GSU keeps UALR’s undefeated streak against Sun Belt opponents alive. The most interesting statistic of the entire match was the fact that there were 36 instances of a tie score during the entire match. Losses always hurt, but the fact that the Eagles actually made UALR work for their win should leave them with a moral victory.

So with two wins, both coming from Sun Belt opponents, the Eagles will make a road trip to Atlanta, Georgia where they’ll face their eighth straight conference opponent when they go up against the Georgia State Panthers. The Panthers have yet to record a win at home.