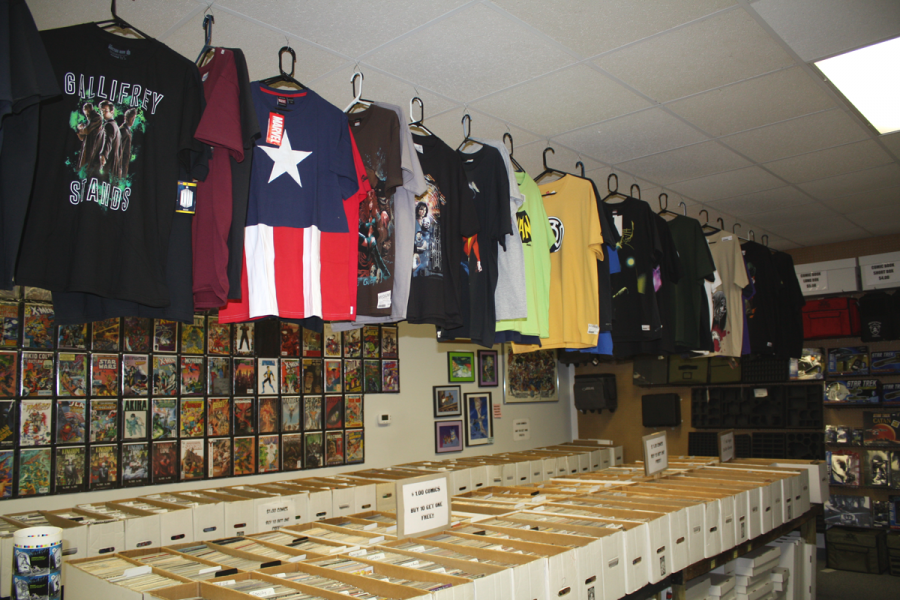 Roughly a decade ago, there was a small shop called Gallop’s Comics & Games located on Highway 67 South near the Kiwanis Fairgrounds. Run by Ted and Debi Gallop, it provided Statesboro with a unique shopping experience for several years.

In November 2006, they decided to sell the shop, but didn’t want to see it disappear. The answer came when Keith Brown, an employee at Gallop’s, offered to buy the store and move it to a different location. Ted stuck with him, this time as an employee, and they moved downtown.

Now a hidden gem on 25 Siebald St., Galactic Comics & Games has been a presence in downtown Statesboro since January 2006, and they’ve been growing rapidly ever since.

“We thought this place was huge at first. We held entire tournaments up front and didn’t have nearly this much inventory then. We’ve expanded a lot,” Brown said

They aren’t done expanding yet, though. A huge warehouse-style building became available at 20 East Vine St. recently, and Keith jumped at the chance to move and expand the business once more.

“We want more of a kid’s section, more space for miniatures, more places for tournaments. We have tournaments, club meetings and people wanting to hang out. We don’t have space for all of them here. We want them all to have space to do anything they want at any time. The new building will give us so much more opportunity for all of those people to do the things that they love,” Brown said.

Keith has been looking for a new location for years, but he’s been very selective. While there have been spaces opening in other parts of town, he stresses that he doesn’t want to become “an impersonal mall comic shop.” According to him, “It’s a lot different than owning a convenience store or just a retail store. It’s like owning a little “Mom & Pop” shop. There’s a whole service side. People come in just to talk and hang out . It’s kind of like Cheers. We have regulars people expect to see here.”

He wants a shop that’s “a destination, not a place to wander in, then simply wander out.” He wants people to come because they love being there, not just because they want to pick up the latest comic or game. The new shop will offer better parking, more visibility, more inventory, and will have “over twice as much gaming space.”

There will even be a room dedicated to role-playing games and board games that can be reserved by anyone who wants to use it. It will have a large table for gaming and comfy chairs that will allow customers to have a place to relax and play longer games with friends.

Brown also said he was glad to be staying downtown. While it has a lot of growing to do, he wants to stick around for it.

“Downtown is missing a nightlife scene. Not clubs, but cool bars, cool pubs. Places that are venues. Ice cream parlors, diners. Downtown has such potential. I want to be here when it happens. I’d love to see that,” Brown said.

Mostly, he is just happy to finally see the shop grow into what he’s always hoped. He stressed that this isn’t a business you go into because you want to make a fortune. It’s a labor of love instead.

“It’s an old building with a lot of history. Now we’ll be able to act upon a lot of our dreams. I’ll be able to retire millionaire, minus the million dollars,” Brown said.

So take the time to check out the shop, even if comics and games aren’t your normal interests. Brown stresses that, “The customer base isn’t what you’d consider stereotypical. There are quite a few girls that play games and read comics, and the age range is huge. We have little kids that play, and they’re all really smart kids, too. We even have more young girls than boys.”