What’s up Gus? : A weekend in the life of Gus the Eagle 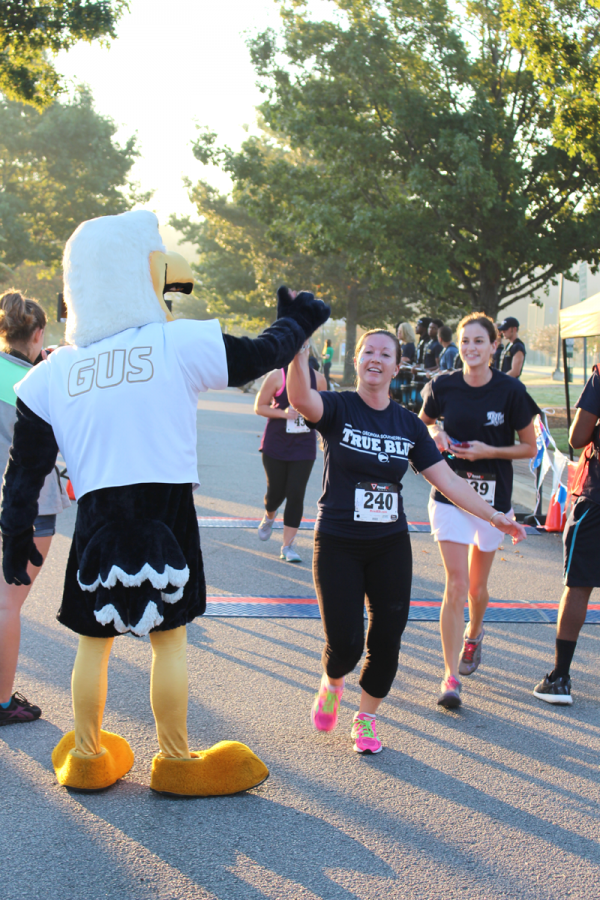 Homecoming weekend kept our bald eagle mascot Gus busy, but what exactly was he busy with? You can always find Gus at home football games in Paulson Stadium, but that’s not all our beloved mascot does during the biggest weekend of football season. Along with being our crowd-leading mascot, Gus had other responsibilities as a celebrity for GSU, which included a TV appearance, being a motivational presence at the True Blue 5K and keeping fans pumped and entertained on various occasions.

Gus made his first Homecoming weekend appearance at the Field of Dreams early Friday morning for an interview with WSAV3 to get the weekend started.

Accompanied by cheerleaders, Gus does Traffic Blitz on the corner of Tillman Rd. and Fair Rd. Gus does this before every game day to try to get the city of Statesboro riled up and headed to the Eagle football games.

What would be Homecoming weekend without the Homecoming parade? Of course our beloved mascot has made his appearance and, of course, he is dressed to the nines for the special occasion. Gus’ antics made him a hit at the parade with fans, old and new.

The True Blue 5k has become a Homecoming tradition and waiting at the finish line is Gus cheering on those True Blue fans.

When the team rolls in on those yellow school busses and car horns fill the tailgate area, you can expect team spirit to soar. You can also expect Gus to be leading the team and pumping up the crowd.

The game has finally arrived as Gus takes on his role in leading the crowd in cheers and keeping up with his regular tricks and mischief. Gus can usually be found living up to his celebrity personality by taking pictures with fans, but no one can doubt that GSU football games are what Gus lives for.

The “Eagle” became GSU’s mascot in 1960 and in 1974, Pam N. Hagan of Winterville, Ga. was paid $50 for the right to use her sketch of an eagle as an advertisement for the university.