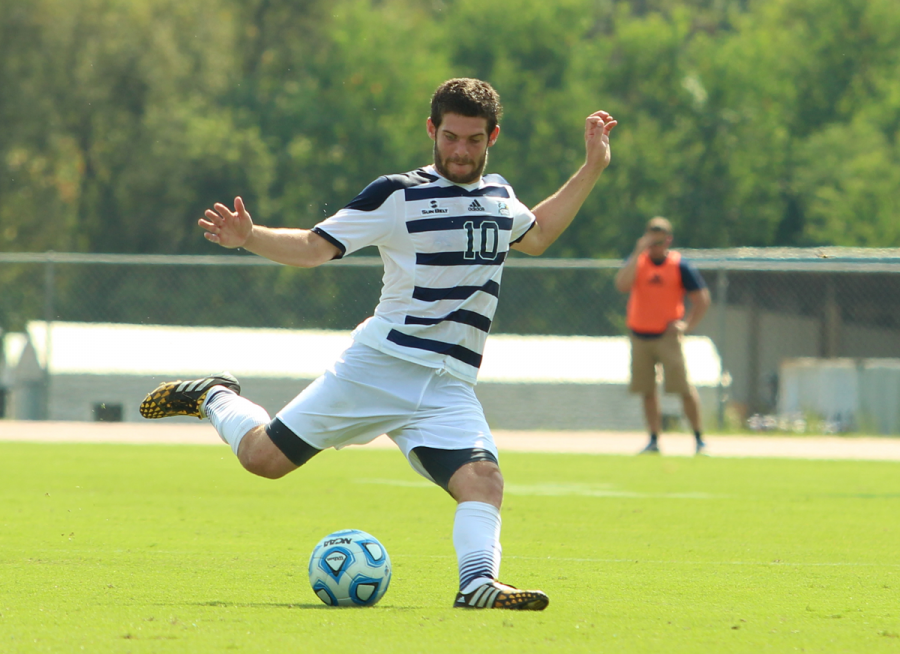 Senior Ethan LaPan (10) and the Georgia Southern men’s soccer team shut out Hartwick at home on Sunday for the first Sun Belt win of the season.

The Georgia Southern men’s soccer team defeated the Hartwick Hawks by a score of 2-0 on Sunday at Eagle Field.

The game featured lots of good ball handling from both teams, as well as missed opportunities on the point of attack. In the first half of the match, both teams spent a good deal of time trying to advance the ball downfield, despite the opposition’s stout defensive efforts.

In the 11th minute of the match, Freshman Nick Wells beat both his defender and the attacking goalie on a left flank shot from the edge of the 18 to give the game’s first goal to the Eagles.

The second half of the game was similar to the first half, with both teams providing solid defensive efforts as well as good goalie play.

Keeper Jack Falle came up big on some key defensive stops. Hartwick played with discipline, only committing five fouls to the Eagles’ 12.

With five minutes left in the game, junior Emmanuel Raji gave Southern another big spark with a beautiful left footed shot from 10 yards to give the Eagles a 2-0 victory over the Hawks.

“Hartwick was really tough to break down, in the first half we were having trouble finding that gas to break them down. Nick Wells is pretty opportunistic, and I don’t think he had an assist there but he was able to get into something,” Head Coach Kevin Kennedy said. “Conference play will always be difficult and to be able to open at home and get a win feels terrific.”