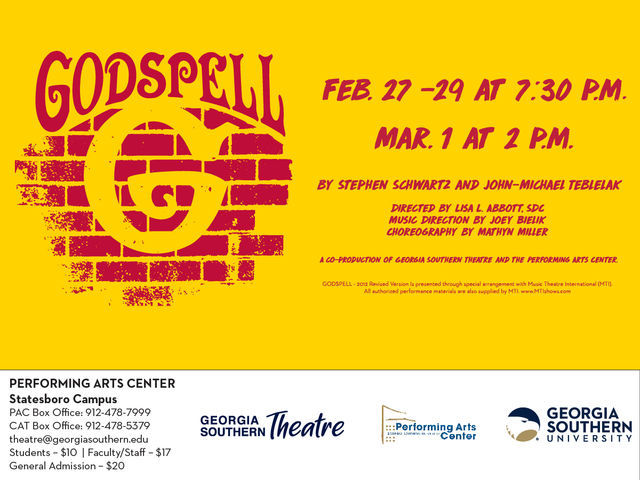 Godspell blends the soul of 70s rock musicals with a variety of song genres and a modern spin to tell a story of love and kindness that still has merit today.

The series is hosted by GS’s Theater and Performance program. The show, which was composed in 1971 by three-time Grammy and Academy Award winner Stephen Schwartz, has been on tour around the country several times since it’s inception and has become a staple in musical theater for several churches and schools.

“The magic of this show is the community it creates not just with the cast but with the audience as well.” Lisa Abbott, the director of “Godspell” said. “The message of the show is about acceptance and love and the cast and crew have enjoyed creating ways to tell that story with open hearts and open minds.”

A tale of a group of people helping Jesus retell the parables of the Book of Matthew in a modern setting, “Godspell” was revisited in 2011, updating it for the 21st century with a new tone and a new song.

The new piece, “Beautiful City”, will join the musical’s already extensive score, which features a variety of genres ranging from vaudeville to pop.

“Godspell” will play at the PAC starting on Feb. 27 to Feb. 29 at 7:30 p.m. and will be shown on March 1 at 2 p.m. Tickets are on sale now at $20 for adults and $10 for children under 17. Discounts are available for GSU student and faculty, and group rates are also available for groups of more than ten.