SGA has no president after voting 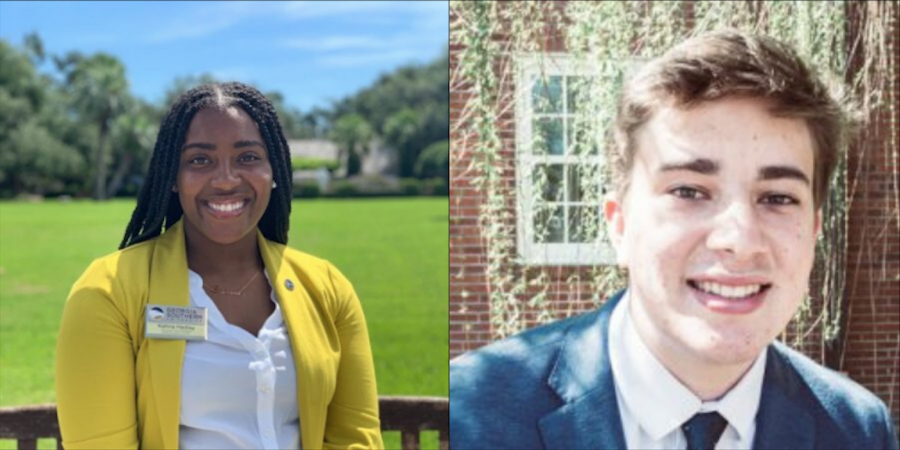 Kahria Hadley (left) and Spencer DeMink (right) are the SGA executive vice presidents of the Statesboro and Armstrong campuses respectively.

STATESBORO — The Student Government Association announced that there is no new overall SGA president for Georgia Southern University at their meeting on Wednesday night.

The Senate body voted last week for a new SGA president to replace Juwan Smith, who resigned in January. The two candidates were Kahria Hadley and Spencer DeMink, who are the executive vice presidents for the Statesboro and Armstrong campuses respectively.

With the votes not resulting in a two-thirds majority for either executive vice president, there is currently no overall president and no steps in measure of what to do for this case.

“The constitution, as it is laid as a product of consolidation, there are some gaps as in terms of what to do when somethings happen or when somethings don’t happen,” Ken Gassiot, SGA advisor and GS associate vice president for student engagement, said.

Gassiot said that he, another advisor and Melanie Miller, GS vice president for student affairs, will discuss what do to about the election issue and figure out a plan.

Hadley said that the organization is having its annual SGA convention in March or April and that she hopes to discuss the gaps in the constitution.

“The constitution was just kind of put together all of a sudden when we first consolidated, so it has been kind of difficult to try to work through,” Hadley said. “It has been a little bit difficult, so I believe it is definitely going to come up so we can make more concrete of a plan.”

Hadley had a meeting with GS Police Chief Laura McCullough about the jogger incident on S&S Greenway walking trail.

“I just wanted to bring it on to campus since it’s not that far away from campus and bring it to Chief McCullough,” Hadley said. “They are heavily increasing patrols on that area since they know that students do walk along that area a lot.”

Hadley said the police are doing this by increasing patrols around there and sending officers on bicycles.