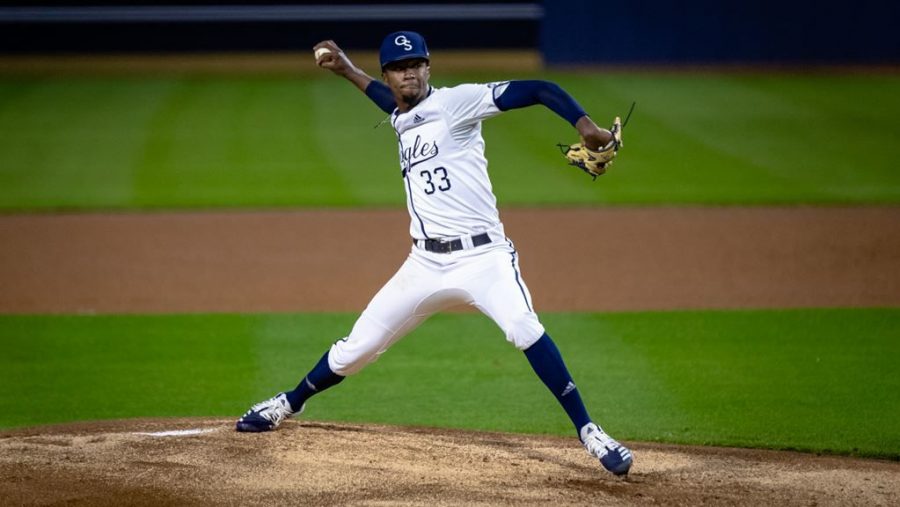 Junior pitcher Jordan Jackson made his Eagles debut. Jackson struck out nine batters and only allowed three hits with no runs.

This was the Eagles first shut-out on opening day since 2015, where they held Bethun-Cookman scoreless.

He faced 19 batters all game and managed to keep his cool after giving up a triple with one out to Ball State. He responded by striking out the next two batters to send it to the bottom of the inning.

“I thought Jordan was terrific tonight. He looked really in control and you know especially for his first outing,” Head Coach Rodney Hennon said. “He got us off to a great start. Did a nice job pitching out of that situation there in the second inning when he gave up the one out triple.”

The game was fairly close until the fourth inning when Mitchell Golden singled up the middle and then Matt Anderson doubled to left field which put runners on second and third with two outs.

Golden then scored the first Eagles run of the game after a wild pitch by Ball State.

The Eagles then exploded in the eight inning, extended their lead with two big hits by Jason Swan and freshman Jarrett Brown.

Swan doubled to center field and cleared a bases loaded situation which allowed Golden, Mason McWhorter and Parker Biederer all to score runs.

After Anderson struck out, Brown stepped up for his 3rd at bat where he secured not only his first hit at the collegiate level but also a home run which extended the Eagles lead to 6-0.

“Jason delivered there with the bases loaded that kind of broke it open a little bit,” Hennon said. “You get to see Jarrett Brown play the way he did tonight, for the first collegiate hit to be a home run, you know it must’ve been pretty special to him.”

GS will be back in action at J.I. Clements Stadium on Saturday at 12 p.m. and 6 p.m. as they play Ball State in the second and third games of a four game series.