The George-Anne Media Group • May 29, 2014 • https://thegeorgeanne.com/9533/news/huckaby-discusses-tuition-hike-tobacco-ban/ 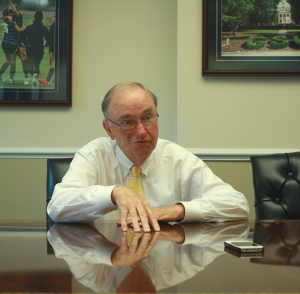 Chancellor Henry Huckaby visited Georgia Southern University to take time to discuss some of the things on the University System of Georgia’s plate in the coming year, including the rise in tuition and the controversial tobacco ban.

“There’s never down time running a system like this,” Huckaby said. “Every year is always very chock-full of opportunities and challenges.”

One issue that affects nearly all students is the rise in tuition. Earlier this year, the Board of Regents approved a 2.5 percent tuition increase. This is the third consecutive year the tuition increase has remained at this level, but in 2012 it was the lowest tuition increase in 10 years.

“Ideally, we would like to be in a situation for several years where we wouldn’t have to have any tuition increase,” Huckaby said. “But we are still feeling the effects of the major budget cuts the university system experienced during the last recession.”

Before the recession, the state funded approximately 75 percent of the universities’ costs. However, now that number is down to less than 50 percent, leaving student tuition to pick up the slack.

Without a large bump in enrollment, raising tuition is the only way for many colleges to get more funds, Huckaby said. This is also the first time in close to five years that the board has been able to appropriate funds for faculty pay raises.

Also among the university system’s concerns is the implementation of the state-wide tobacco ban, which was met with some controversy at Georgia Southern.

The ban will take effect on Oct. 1, but universities have some leeway in how they will choose to implement the ban. Universities will present their implementation plans to a staff member from the university system, Huckaby said.

Huckaby was unsure whether or not being a tobacco-free campus would affect the university’s insurance, but said he felt the ban would improve the overall health of students and faculty of GSU.

“We have to remember that there are 10 or so institutions in our system that have been tobacco-free for a long time,” Huckaby said. “So it’s not something new.”

The university system is also concerned with the amount of student debt, needs-based financial aid and reports of mishandled sexual assault cases on university campuses. Huckaby said the university system are in the process of gathering its information so it can better assess the situation and find solutions.

Above anything else, Huckaby said he wants students to know that college is worth it.

“From time to time, we hear people say, ‘Well, college is too expensive. It’s not worth it. It’s not relevant,’” Huckaby said. “That’s a siren song that will lead you nowhere good. This is a good place to be, and you’ll never regret it.”