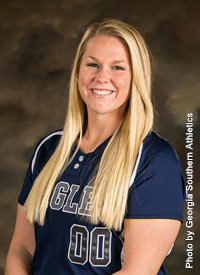 The dynasty of this senior class has allowed the Georgia Southern University’s softball team to accomplish two consecutive Southern Conference championships and possibly end their career with a third.

The Eagles still have one more conference series left before the tournament, but it will take quite a lot to knock GSU out of the top seed in the SoCon. Head Coach Annie Smith took this program to a new level and that was primarily due to the amount of talent this senior class provided.

Senior pitcher Sarah Purvis has been the Eagles powerhouse in the circle since 2012, her sophomore year, when she got the opportunity to start for GSU. In her last two seasons, not only did she lead the Eagles to SoCon championships, she also earned SoCon Pitcher of the Year both times.

The Eagles are continuing to grow and recruit players with high levels of talent, but this senior lineup of players is just too strong to replace.

Senior infielder Kourtny Thomas was a sophomore transfer from the University of Tennessee when she came to GSU. As starting shortstop, Thomas is quick to make plays in the infield, but behind the plate is where the Eagles lean on her the most. Almost every time Thomas is up to bat, the Eagles can expect something out of her.

This team has most of its success when the Eagles are being consistent and owning their jobs. Senior infielder Shelby Morrill is one of those players that has consistently performed for the Eagles when they needed her the most ever since her freshman year.

Needless to say, this group of Eagles is going to be hard to shut out in the SoCon Tournament. GSU has everything riding on the outcome of this season. The returning players are all talented, but this group was about as good as it gets in the SoCon. For the seniors, this championship means every thing; it is the legacy they will leave behind and it is what will be remembered of them.

The Eagles will finish off their regular season play this weekend in a road series against Samford University. While the rest of the university is cramming for finals, the Eagles will begin the SoCon tournament on Wednesday, May 7 in Greensboro N.C.