The George-Anne Media Group • May 10, 2014 • https://thegeorgeanne.com/9543/sports/vikings-take-mckinnon-in-third-round/

Vikings take McKinnon in third round 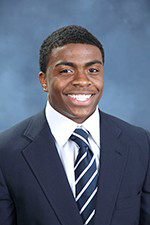 With the 96th pick in the 2014 NFL Draft, the Minnesota Vikings selected running back Jerick McKinnon from Georgia Southern University. The pick was acquired from a trade with the Seattle Seahawks.

“When they called me, I just started crying,” McKinnon said in a news release. “I can’t explain how I feel. There has been so much that has gone into this day. I started playing when I was four years old and my pops would coach me in the backyard after school. Just to get to this point, there was so much work and effort, and having it play out this way, this is a testament of God doing His work. At the end of the day, I feel very blessed.”

McKinnon was projected as a late third-early fourth round selection. He was critiqued by the scouts at the NFL combine where they listed him as a versatile back that is a tough runner who mostly falls forward on tackles.

At the combine McKinnon impressed NFL coaches by bench-pressing 225lbs. 32 times, more than any other running back in the event. He also showed off his athleticism by receiving top scores in every event he performed which included running a 4.41 40-yard dash and a 40.5 inch vertical jump.

The Vikings currently have four running backs on their active roster. McKinnon will have the chance to learn under 2012 NFL MVP Adrian Peterson. Fans will have their first chance to watch the former Eagle play in the purple and gold on Friday, August 8 against the Oakland Raiders.