The George-Anne Media Group • May 1, 2014 • https://thegeorgeanne.com/9573/sports/martinaes-journey-back-into-the-game/

Martinâ€™s journey back into the game 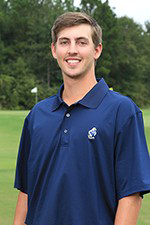 For Martin, the game of golf came naturally. Since he was 11-years-old, he knew that was what he wanted to do. To have all that confidence completely stripped away after hitting the opening drive of one of the most important tournaments of the season into the woods, his future in golf was looking questionable.

“I was playing really good my fall semester of my sophomore year and didn’t really practice a lot over the break,” Martin said. “I just thought it would always kind of be with me. I thought I was always going to be able to hit a golf ball.”

The problem was found in his swing. Having played golf for a long time, Martin took for granted the golf swing he had established for himself thinking that it would never go away. After returning from winter break his sophomore year, he started occasionally hitting bad shots, but since that happens often in golf, Martin and his coaches thought nothing of it.

“It’s hard to pinpoint a certain time when we looked at it and went, ‘okay, something’s going on,’ Carter Collins, assistant head coach, said. “He’s so athletic, he would piece it back together so he would have day or two of bad swings and bad shots then he’d find a way to get it back together so by the time we thought things were getting bad, he’d have it fixed.”

At the 2013 NCAA Regional tournament was when the trouble became evident. After shooting 17 over on the last five holes of the practice round, Head Coach Larry Mays and Coach Collins voiced their concern for his place in the tournament which caused his competitive attitude to take over. He finished the tournament with two 81 and an 86 in rounds one, two and three, but that was just the beginning of a long summer full of losses.

“I was finishing almost dead last in every tournament I played in,” Martin said. “It was embarrassing yes, but that’s not what really kept me from it. I withdrew from the last couple tournaments I was going to play in that summer because I didn’t even want to play.”

Despite the mental toil Martin was going through, his attitude throughout the whole thing stayed positive. Positive support from coaches, teammates and family as well as his competitive mindset allowed him to keep his sanity and not give up even if the love he had for the sport was facing challenges.

“We never saw major frustration, we never saw club swinging, we never saw just him acting a fool out there,” Collins said. “He always acted well even during the worst times, but we saw him falling out of love with the game of golf because it was beating him down so much.”

To start the process of falling back in love with the game, Martin took a month off from playing golf. Taking his first lesson since starting college, Martin began looking at the reasoning why his swing was wrong. Following that, he began the process of rebuilding his swing and finding the fun in practicing the game he’s played for so long.

“Being humbled out like that really just made me respect the game a lot more and want to practice and make practicing fun and not just think about it as a job,” Martin said. “That was probably the hardest challenge I’ve ever been through. I’m still not where I want to be, but I’m definitely in the right direction.”

Martin shot under par for the first time in months on the second round of the first qualifier of the 2014 spring season. Since then his game has continued to get better and as a result has finished in top 10 positions four out of the last five tournaments including his fourth place finish at the SoCon Championship tournament last week. Martin received all-conference honors because of his performance showing how his hard work and perseverance caused him to have possibly the best season of his career.